Ash Barty emerges victorious in a “frustrating” battle at the China Open to set up a quarterfinal meeting with Petra Kvitova. 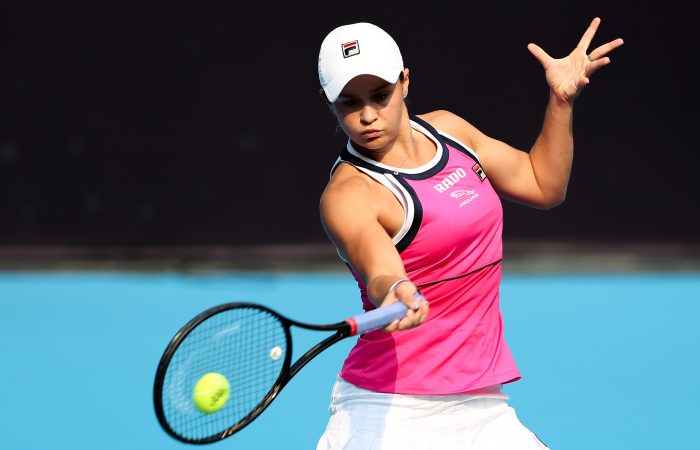 Ash Barty managed to cut the errors out of her game to dominate the third set of her match at the China Open against local hope Zheng Saisai.

The world No.1 and top seed refocused after an error-strewn second-set tiebreak to win 6-3 6-7(5) 6-2, a victory propelling her into the quarterfinals in Beijing.

There she will meet Petra Kvitova, after the seventh seed overpowered No.9 seed Belinda Bencic in straight sets.

“I played a pretty stupid set. I made probably over 20 errors in that second set, and cheap ones in rolls, in twos and threes in a row, which is disappointing. Not things that I like to do,” Barty assessed.

“Let her back in the match well and truly.

“I think too many times I gave away cheap service games. When I did have my opportunity, I didn’t take it.

“I just had to reset (in the third). I had to know that the match was well and truly on my racquet. Happy with how we were able to respond in that third set. Overall, a frustrating night.

“But the beauty of this sport is that we’re still alive in the tournament. I’ve kind of got a fresh day come Friday (against Kvitova) where it can be a completely different game.”

Barty started brilliantly, the sound of the ball connecting with her racquet reverberating throughout the Diamond Court far more powerfully than the sound her opponent generated.

The Australian surged to a 4-1 lead and took the opening set four games later.

She also earned three break points in the ninth game of the second set, which, if converted, would have seen her move ahead 5-4 and serve for the match.

Yet Zheng was dogged, and Barty’s game began to unravel. By the time the set progressed to a tiebreak, the top seed was committing unforced errors on almost every point, and she promptly fell behind 6-1.

Barty won four straight points to increase the tension inside the 15,000-seat stadium, but Zheng landed her second serve on the subsequent point and Barty erred again, handing the Chinese player the set.

She survived two break points in the fifth game – which extended for seven minutes – and later held serve to love to close out the match in two hours and 32 minutes.

She will face Kvitova for the fourth time in 2019, having won their most recent encounter in the Miami Open quarterfinals in March.

“I love playing Petra. I really do. I don’t have the greatest record against her. She is an opponent that I love to test myself against,” said Barty, who lost to the Czech in the Sydney final and the Australian Open quarterfinals in January.

“It’s an extremely difficult match-up. It’s always a tricky one for me.

“She’s one of the best human beings on the WTA Tour. It’s always nice to be able to share the court with her. Come Friday, we’re going to have hopefully another good match.”