Sam Stosur fights hard but ultimately goes down in three sets to world No.20 Sofia Kenin, who captures her third title of season 2019 in Guangzhou. 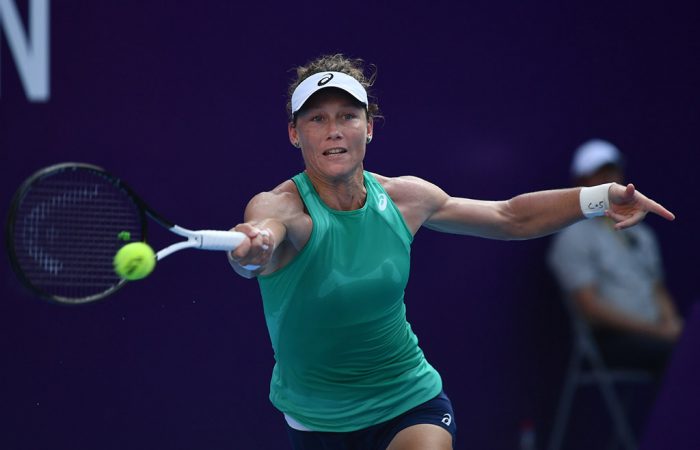 Sam Stosur’s impressive week at the Guangzhou Open ended on Saturday with a three-set loss to third seed Sofia Kenin in the final.

The resurgent Stosur, ranked 129th and requiring a wildcard to enter the main draw, came within two games of a big upset before the American dug in to win her third WTA title of 2019.

Despite the loss, Stosur is projected to return to the world’s top 100 next week after appearing in her first final in more than two years.

“I feel really proud of myself,” Stosur said on court after her week in Guangzhou came to an end.

“She played very, very well throughout the whole match, and then really picked it up in that second set and third set. So credit to her.

“But I still made the final so there’s still lots to be proud of.”

Still a great week for Stosur.

Back inside the top 100, which should be enough to land her a direct spot into the Australian Open (instead of needing a WC).

Stosur was forced to battle from the start against her 20th-ranked opponent, surviving break points in the second game and then getting broken to love to trail 2-4.

Yet she earned her first break points of the match in the seventh game and converted to break back, before producing forehand and overhead winners to level scores at 4-4.

In the ensuing tiebreak, Stosur let slip a 4-2 lead only for Kenin, now at 4-4, to press and commit three errors, handing Stosur the set after a lengthy 66-minute battle.

The Australian fell behind 0-2 in the second set only to storm back; she belted three consecutive aces en route to a hold, part of a run where she won 12 of 13 points to move ahead 3-2.

Stosur would hold serve to move ahead 4-3, but here Kenin dug in.

Sofia Kenin takes home her 3rd title of the season, coming back to defeat Sam Stosur 67 64 62 to win Guangzhou.

Suddenly she stopped missing, while Stosur’s level dipped slightly. Increasingly aggressive, Kenin powered through seven consecutive games to take the second set and a 4-0 lead in the third.

Midway through the third set Kenin had forced 12 errors from Stosur’s racquet yet had committed just one forced error of her own — a stat highlighting the No.3 seed’s increasing confidence and aggression.

And although Stosur got on the board in the fifth game and held again to improve scores to 2-5, she was too far behind at that point to seriously trouble the American.

“I think it was pretty close — there wasn’t a whole lot in it,” Stosur said.

“But I didn’t get off to as good a start in the third set as what I wanted to, and that kind of made the difference I think as the third (set) went on.”

Stosur was then handed the microphone during the trophy ceremony.

“I’d like to thank all my team … it was a great week and couldn’t have done it without you. Hopefully we can get to another final sometime soon — that’d be great,” she said.

“Thank you very much (to the tournament) for the wildcard, as I was able to play — I certainly made the most of it.”