The National Indigenous Tennis Carnival gets underway from tomorrow, with 180 participants from every state and territory travelling to the event. 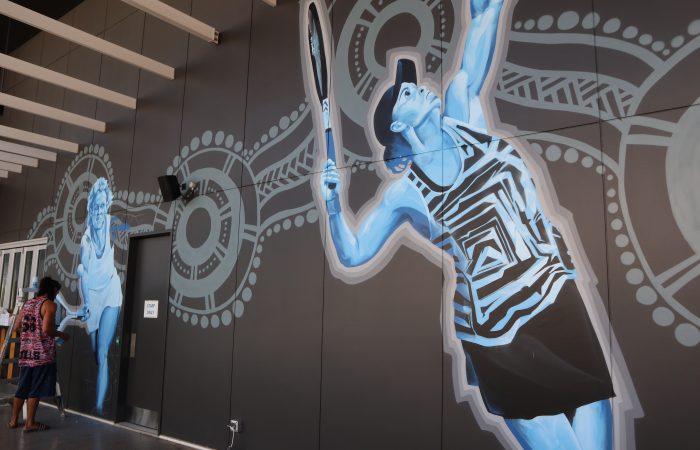 Works are underway on a mural being painted in honour of Indigenous tennis players Evonne Goolagong Cawley and world No.2 Ash Barty during the second edition of the National Indigenous Tennis Carnival this week in Darwin, Northern Territory.

The artwork, curated by David Collins is being painted by Larrakia man Shaun Lee ‘Hafleg’ and portrait artist Jesse Bell, as a celebration of Goolagong Cawley and Barty, the only two Australian women to achieve the world No.1 singles ranking in the modern era.

The 10×5 metre mural will be featured at the Darwin International Tennis Centre for all to see and will be completed on Friday 30 August, in time for the community concert with Djuki Mala and Yirrmal taking place that evening.

“We came up with the idea to paint the mural to align with the running of the National Indigenous Tennis Carnival in Darwin and as a way to celebrate these two great ambassadors in Evonne Goolagong Cawley and Ash Barty,” Tennis NT CEO Sam Gibson said.

“We wanted to acknowledge everything they’ve been able to do and still continue to do for the sport and Indigenous Australians and what better way to do that then through a life sized mural,”

“The mural is going to be a great addition to the facility and the NT – Evonne Goolagong Cawley is one of the countries most respected Indigenous icons, and Ash, what she’s been able to achieve this year and her momentous rise to the top is inspiring not only Indigenous people, but all Australians.

“We are very fortunate in tennis to have Evonne and Ash as ambassadors for our sport, and hope that Territorians and tourists alike can enjoy this great artwork.

“The mural will be fully completed by Friday evening when the community concert with Djuki Mala and Yirrmal is on so we encourage everyone to come down and see the amazing artwork and support this amazing local event and the many cultural and tennis opportunities on offer,” Gibson continued.

“The mural idea came about when Tennis Australia approached us to create an artwork that celebrated Australian tennis icons and Indigenous role models Evonne and Ash, so I recruited two of the best artists in Shaun Lee, a Larrakia artist and Jesse Bell, one of the most renowned portrait artists in Darwin,” Mural curator David Collins said.

Goolagong Cawley amassed 14 Grand Slam titles during her career and plays a pivotal role in supporting and educating Aboriginal youth on health and wellbeing through her foundation and Barty is a passionate advocate for all Indigenous Australians, and her meteoric rise through the sporting ranks which has seen the Queenslander win her first Grand Slam title, reach world No.1, and be the most Googled Aussie by Aussies in 2019, will hopefully inspire more Indigenous youth to pick up a racquet.

Celebrating the cultures of Aboriginal and Torres Strait Islanders, the National Indigenous Tennis Carnival is a community event and invites the general public to support the players and engage in culture activities, music and workshops throughout the event.

In its first year the carnival became the nation’s largest-ever gathering of Indigenous tennis players with more than 200 participants from every state and territory taking part. The event is a pivotal part of the Indigenous tennis pathway, and provides an opportunity for not only the elite Indigenous tennis performers, but those just trying the sport for the first time.