Barty ‘super relaxed’ for US Open

No.2 seed Ash Barty returns to the site of the first Grand Slam tournament at which she reached the second week. 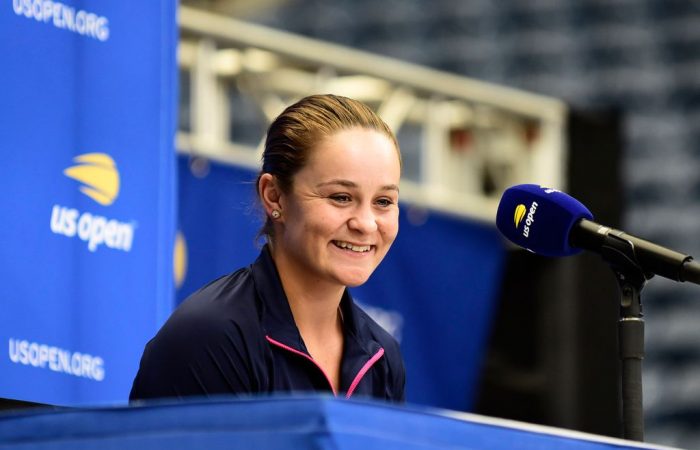 Ash Barty has arrived in New York feeling relaxed and ready for a serious title assault as she eyes a second Grand Slam crown in 2019.

On guard against a Wimbledon-style ambush, the world No.2 is refusing to take comfort in what, on paper at least, appears to be an innocuous path through the draw in the first week.

But Australia’s big hope is taking nothing for granted despite world No.30 Maria Sakkari being the highest-ranked rival standing between Barty and a place in the last 16.

“If we look through draws and everyone who is expected to win, then there would be no point playing here. We’d already know who would win the tournament,” Barty said ahead of her opener on Monday against Kazakhstan’s world No.77 Zarina Diyas.

🌚
Serena vs Sharapova
Federer vs Qualifier

“And that’s the beauty of sport. Nothing is ever assured. You have to come out and bring your best every day and do the best that you can.

“I’ve seen my first round is with Zarina and that’s all I’ve literally looked at. I didn’t even bother looking at the rest of the draw.”

Barty is relishing a return to the Flushing Meadows hard courts, where she reached the fourth round for the first time last year and also landed the doubles crown with Coco Vandeweghe.

“I played an incredible fortnight of tennis last year and it’s really nice to be back,” the Queenslander said.

“I actually really like the conditions here in New York. When it’s really hot, it can be challenging physically and it changes a little bit from day to night sessions so it can depend a bit on scheduling — where you play and what the conditions are like — but I love playing here.”

“There is no place in the world like New York."

It's safe to say that @ashbar96 loves the Big Apple. 😉

After losing her opening match of the North American hardcourt swing in Toronto, Barty reached the semifinals last week in Cincinnati but fell a win short of regaining the world No.1 ranking from Naomi Osaka.

Not that the 23-year-old believes being denied the top seeding will relieve the pressure at all.

“The seeding next to your name doesn’t really matter much at all,” said Barty, who, as top seed, fell to unseeded American Alison Riske in the fourth round at Wimbledon.

“I didn’t feel like there was any extra pressure at Wimbledon. For me, it was a career-best tournament — fourth round is certainly nothing to be ashamed of and being able to make second week at another slam was really important.

“After Wimbledon, it was important for me to have two weeks where I didn’t do anything. I didn’t touch a racquet, just to really refresh and relax and knowing that I’d probably go into Toronto and Cincinnati a little bit underdone but knowing there was a view that we wanted to ready for this week here in New York.