Ash Barty is edging closer to reclaiming the world No.1 ranking after battling into the Cincinnati semifinals. 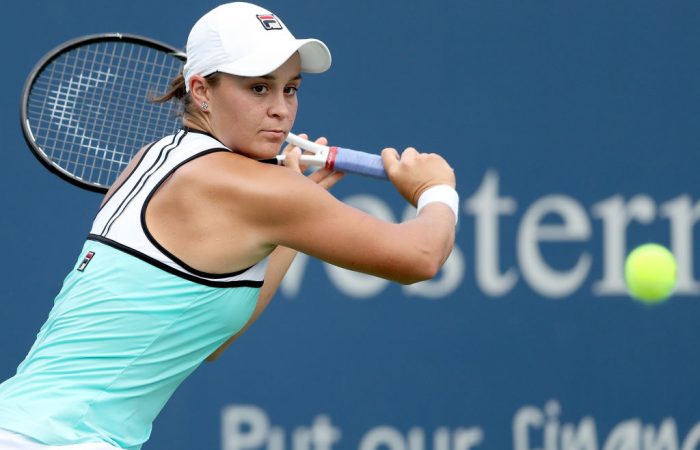 Ash Barty was in a familiar predicament, trying to dig out from a difficult first set. The Western & Southern Open’s top seed found a way to do it again.

Barty reached the semifinals of the tournament for the first time and moved closer to regaining the No.1 world ranking by beating Maria Sakkari 5-7 6-2 6-0.

With one more win, she can move into the top spot for the US Open, taking it back from Naomi Osaka, who retired from her semifinal against Sofia Kenin with a knee injury.

Barty is feeling good about her play with the US Open just ahead.

“Still not quite there, but we’re getting better and better each match,” the French Open champion said.

“I think that’s the beauty of being able to stay alive in the tournament is to give myself an opportunity to keep getting better. I think I’m still aiming to obviously do very well here, but the big picture is New York in 10 days’ time.”

She needs some work on first sets, though.

Barty got ahead 5-2 in her opening set Friday and then wavered, letting it slip away as Sakkari became more aggressive.

It was the second straight day that Barty rallied after dropping a first set. She fought off a match point during a three-set win over Anett Kontaveit on Thursday, showing poise that she’d need to draw on again a day later.

“There is certainly no panic, where it gets to the stage where I’m kind of overwrought or can’t think straight,” she said.

“I’m still able to, more times than not, have the ability to relax and kind of stay clear and come back to what works.”

Barty next faces Svetlana Kuznetsova, who reached her first semifinal of the season by beating third-seeded Karolina Pliskova 3-6 7-6 (2) 6-3.

Kuznetsova is playing only her ninth event after missing the start of the season because of a knee injury. Playing on a hot, humid afternoon, she got treatment on her upper right leg after the second set and twice again during the final one.