Barty unaffected by rise to top

Ash Barty says she will “go about my business in the exact same way” when she embarks on her Toronto campaign this week as the top seed. 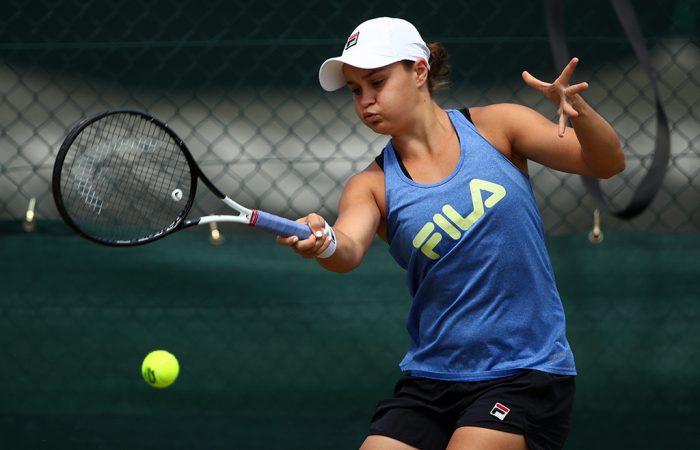 World No.1 and reigning French Open champion Ash Barty will make her first appearance on the singles court since Wimbledon when she heads the field in Toronto.

The Australian, who will play Sofia Kenin in the second round after a first-round bye, is refreshed after a much-needed break to come to terms with her achievements during the European summer.

“It’s just been a bizarre whirlwind few months for me, but it was really nice to go back home and refresh and relax with family. I think that’s kind of when it set in a little bit more,” she explained to journalists during a round-table interview in Toronto.

“That was the best thing, just being able to share that with those that I love the most [about] everything that I went through in the last two or three months.”

Forgot what that was? Here’s a brief re-cap.

After reaching the quarters in Madrid and third round in Rome, Barty went all the way to the title at Roland Garros, her first Grand Slam singles trophy and a result that propelled her to world No.2.

No.2 became No.1 when she hit the grass and won the WTA title in Birmingham.

Arriving at Wimbledon on a 12-match winning streak and seeded No.1 at a major tournament for the first time, Barty progressed to the fourth round – her best ever singles result at the All England Club – before Alison Riske stopped her in three sets.

She remains at world No.1, although Naomi Osaka or Karolina Pliskova could usurp her with a strong showing in Canada, where Barty reached the semifinals in 2018.

Interestingly, the last time she was in Toronto – the Canadian event switches between Toronto and Montreal each year – Barty was forced to come through the qualifying rounds.

Despite the enormous strides she has made, Barty is strikingly unaffected by her position at the top of the game as well as her burgeoning profile.

How cute are these 🐾earrings? @ashbar96 at the All Access Hour in Toronto pic.twitter.com/xlpEu5asu2

“I’m talking to you guys [the press] more and more now, but I don’t feel like I have a lot to say,” she admitted.

“For me really, nothing has changed. It’s all pretty normal, it’s all part and parcel of what we do and the crazy ride that we’re on as tennis players.

“Even though at the moment I’ve got the No.1 ranking and a Grand Slam title, I’m trying to go about my business in the exact same way. I’m trying to get better as a person and a player every day. I’m still extremely hungry and driven to try and progress and become better every day.

“I’m far from a champion. When I think of legends and champions, particularly on the women’s side, I think of Evonne [Goolagong], Alicia [Molik] and Casey [Dellacqua], in my eyes.

“It’s just genuine people who had a crack and were the best version of themselves, did the best that they could and applied themselves every single day … regardless of how many titles you win or what number is next to your name.

“I’m just trying to do that every single day.”

Barty began on a winning note in Toronto in doubles on Monday, combining with Victoria Azarenka to beat fellow Australians Monique Adamczak and Storm Sanders 6-1 6-2.