Nick Kyrgios beats Yoshihito Nishioka in straight sets to progress to the last eight at the Citi Open, after fellow Aussie Jordan Thompson lost to No.1 seed Stefanos Tsitsipas. 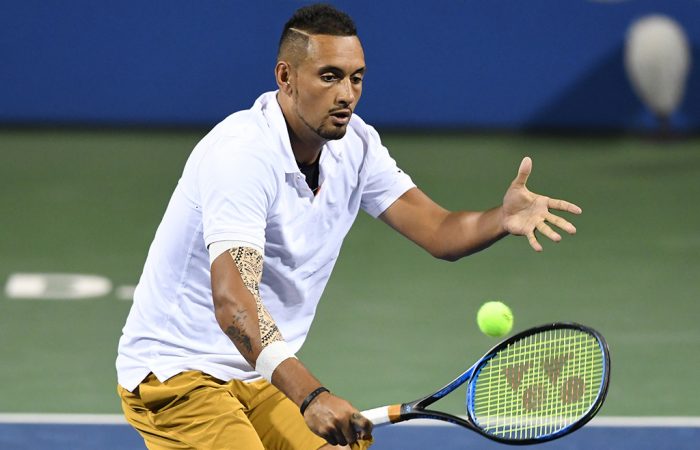 Nick Kyrgios sealed a place in the quarterfinals of the ATP tournament in Washington DC after a straight-sets win over Yoshihito Nishioka.

Kyrgios’ 6-2 7-5 victory extended his head-to-head dominance over the Japanese player to 4-0 and set up a clash with Slovakian Norbert Gombos.

Hot in the Citi 💪@StefTsitsipas works his way past Jordan Thompson and into the quarter-finals at @CitiOpen with a 6-3 7-6(4) victory. #CO19 pic.twitter.com/CnmLOkJjIQ

Thompson fought hard and held a set point in the 10th game of the second set, but the world No.6 hit his way out of trouble and dominated the subsequent tiebreak.

At the ATP tournament in Los Cabos, Thanasi Kokkinakis went down 6-3 6-3 to Radu Albot.

Playing in his first tour-level quarterfinal in two years, Kokkinakis struggled on serve, winning just over half of his first-serve points and dropping serve three times in the 88-minute contest.

Nevertheless, it was an encouraging week for the injury-ravaged Australian, who is set to improve his ranking 26 places to No.165 next week.

Kyrgios raced through the first set against Nishioka in just 23 minutes; he only dropped one point on his first serve and landed 94 per cent of them.

“I came out on fire,” he said when talking with Tennis TV. “My serve is my main weapon; I feel like I’ve got control of that all the time, and I want to take advantage of it. I don’t want to rally too much guys like Yoshi.”

The second set was tighter, with Kyrgios growing disgruntled as his first serve began to miss the mark — although he still maintained a first-serve-points-won percentage of almost 80.

Yet despite the fact Nishioka was able to do an increasing amount of damage from the back of the court, Kyrgios could still summon his serve when he needed it.

He was frustrated to drop serve immediately after going up a break in the second set, but when he broke the Japanese left-hander in the 11th game, four aces in the final game helped him close it out.

🇦🇺 @NickKyrgios is fired up! 🔥💪

“We grew up together so we know each other’s games pretty well … after that knee injury it’s amazing to see him move the way he does,” Kyrgios said of Nishioka.

“He made me really work for that second set; I was starting to lose it a little bit mentally. That’s his strength, he competes like a dog.

“Super happy with that win. I’m consciously working on a couple of things mentally this week and I proved to myself I can do that in the first set – I’ve just got to maintain that through the match.

“I’ve got some people helping me to really work on the mental side of things, because I really want to make an improvement.

“I’m winning matches, and there are glimpses of that coming through, but obviously still some of the old habits there that are probably never going to completely leave, but I’m trying to keep them bottled as much as possible.”

Kyrgios owns a 1-0 winning record over lucky loser Gombos, who arrived in the Washington DC quarters thanks to a 1-6 6-3 7-6(4) win over Miomir Kecmanovic.

Currently ranked 52nd, Kyrgios is projected to rise to No.41 in next week’s ATP rankings.