Ash Barty has become the first Australian player to win the ITF's Fed Cup Heart Award for her heroic effort in April's semifinal. 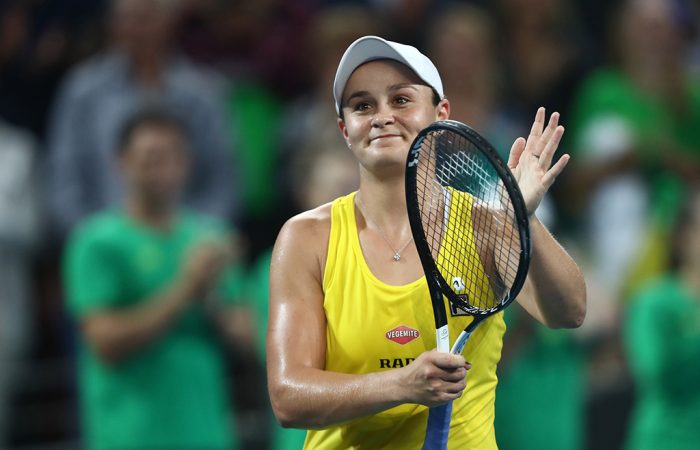 Initiated by the ITF in 2009, the Fed Cup Heart Award recognises players who have represented their country with distinction, shown exceptional courage on court and demonstrated outstanding commitment to their team during Fed Cup.

Barty was nominated for the Award after leading Australia to a 3-2 victory over Belarus in the semifinals in Brisbane in April. She won both her singles matches – against top players Aryna Sabalenka and Victoria Azarenka, and teamed with Sam Stosur to win the crucial doubles rubber, taking Australia to their first Fed Cup final in 26 years.

“Playing for my country is always a privilege and Fed Cup weeks are my favourite time of the year. I’m honoured to have won the Fed Cup Heart Award for my role in our semifinal win,” Ash Barty said.

“I’m looking forward to donating the $10,000 to my charity partner, the RSPCA. Animal welfare is close to my heart and I’m happy to help provide some extra support for the wonderful work the RSPCA do.

“Having the chance to play in Fed Cup Final is something I have always dreamt of and I’m so happy we’ll be playing the final at home in Australia. It will be another great opportunity to pull on the green and gold and work together with Alicia (Molik) and our whole team to hopefully get the ultimate win for Australia.”

The world No.2 has an enviable Fed Cup record, having won 17 matches from the 19 she’s played, with a win/loss of 10-1 in singles and 7-1 in doubles. Barty makes no secret of her enjoyment playing doubles, reflected in the fact she is the only player, male or female, ranked in the top 10 for both singles and doubles.

Barty’s dominance has been pivotal in Australia’s quest for the Fed Cup. She’s not only won all six rubbers this year, she’s also made history as the first player to both play and win every possible match on the way to the final.

Fed Cup Heart Award candidates are determined by a seven-person panel of international journalists, former Fed Cup players and ITF representatives after each Fed Cup round, and a public fan vote determines a winner.

Australia will host the 2019 Fed Cup by BNP Paribas Final against France, in Perth from 9-10 November 2019. The home side will be aiming to win their first Fed Cup title in more than 45 years. Two-day ticket packages are now on sale via Ticketek at www.ticketek.com.au/fedcup.

For more information on the Fed Cup Heart Award and a full list of previous winners please visit: www.fedcup.com/heart-award.aspx