A 59-minute domination of Jennifer Brady has seen world No.2 Ash Barty win through to the last eight of the WTA grass-court event in Birmingham. 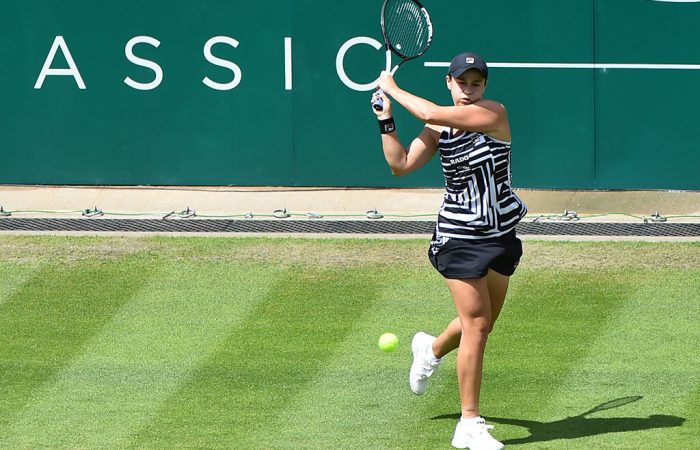 A second straight-set win in as many days has sent Ash Barty through to the quarterfinals of the Nature Valley Open in Birmingham.

After beating Donna Vekic 6-3 6-4 on Wednesday, the world No.2 needed less than an hour to swat aside Jennifer Brady 6-3 6-1 on Centre Court.

The victory sets up a meeting in the last eight with five-time Wimbledon champion Venus Williams, who beat Chinese No.6 seed Wang Qiang in straight sets.

“I felt really good out here today – I felt much better than I did my first round. And it’s really nice to come out here and play on this beautiful court again,” Barty said.

I asked Ash Barty yesterday about the burden of expectation and she looked at me like she'd never considered the possibility. She's certainly playing like that. A 6-3 6-1 win over Jennifer Brady and she's into the quarters at #NatureValleyClassic

“It was important for me to try and nullify her serve as much as I could today, and I felt like I served well and looked after my own service games pretty well.”

The Australian’s slice prevented Brady from attacking as she wanted and forced her to generate much of her own pace – and she increasingly misfired as the match wore on.

A delightful defensive lob from Barty was followed by a missed overhead from Brady, helping the second seed to break for a 3-1 lead in the second set.

She broke again for 5-1 when Brady fired groundstrokes long on consecutive points, and sealed victory with a backhand winner down the line.

The wins keep on coming for @ashbar96 🌱

It was a particularly composed performance from the reigning Roland Garros champion, who, despite two rain delays, comfortably extended her winning streak to nine.

“What a beautiful English summer day hey?” Barty laughed, before revealing she had kept tabs on the Australian cricket team’s progress in the World Cup while forced off court.

“We knew that there wasn’t going to be too much of an interruption with the rain – it was just waiting it out.

“Both times we went off I flicked on the (scores), the Aussies are batting, so looked at the scores, but they were pretty quick turnarounds so it was easy to just warm up again and come back out here.”