Barty begins with a win in Birmingham 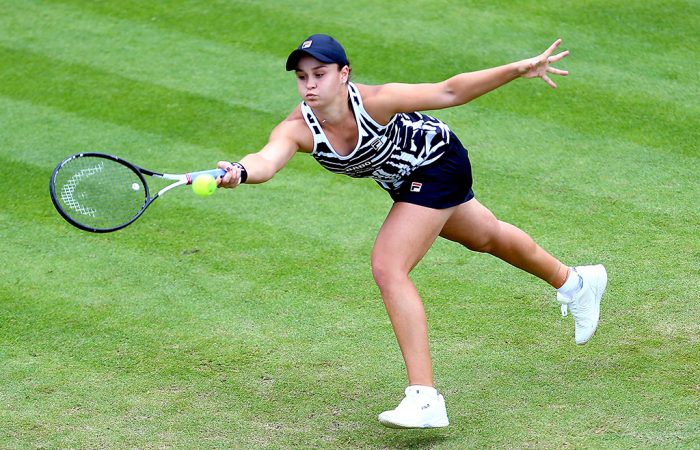 In a solid start to her grass-court singles campaign in 2019, Ash Barty defeated Donna Vekic in straight sets on Wednesday to reach the second round in Birmingham.

The No.2 seed beat last week’s Nottingham finalist 6-3 6-4 to set up a meeting in the last 16 with American Jennifer Brady.

Returning to a tournament where she reached the final in 2017, Barty had plenty of reason to be pleased with her performance, her first singles outing since lifting the trophy at the French Open.

How good is it to see Barty back on the #NatureValleyClassic 🌱?

“It was the perfect first test for me. I knew that I had to be sharp and I had to be ready. Otherwise it wouldn’t even be a contest,” Barty said on court after her 71-minute triumph.

“It was nice and clean today out here. Donna’s obviously had phenomenal grass-court seasons in the past, and I’m sure she’ll be one to look for at Wimbledon.

“Obviously it’s a little bit different (to Roland Garros) but I love playing here, I love playing on the grass, and Birmingham for me I have such good memories from this beautiful court.

“I was just really excited to come back out and kind of dust off the cobwebs a little bit.”

It was the first meeting between Barty and Vekic, two players separated by just a few months in age and who are both at their strongest on grass courts.

The Croatian went ahead an early break but Barty responded with an immediate break back; when Barty broke again for a 5-3 lead she now really had her teeth into the match, and she slammed four powerful first serves in the following game to hold at love and take the first set.

The world No.2 then broke immediately in the second set; when she consolidated that to lead 2-0, she had won seven of the last eight games.

Double the number of winners had streamed off her racquet compared with Vekic’s, and a few games later the Aussie was quickly ahead 5-2.

Vekic loosened up, found her range and closed the gap to 5-4 thanks to a succession of her own winners, but when Barty served for the match a second time, she did not falter.

The only real smudge on Barty’s stat sheet was seven double faults. But these were tempered by five aces, and off the ground she finished with 16 winners to just seven unforced errors.

Taking some time off from training following her Grand Slam breakthrough in Paris proved a master stroke; there appeared to be no “hangover” when she reappeared for singles duty on Wednesday.

“It was really nice to have two or three quiet days to kind of rest and recover and feel like when I was drawn to play here I was going to be ready to go,” she said.

Barty beat Brady in their only previous meeting, winning 6-3 6-2 in the third round of Indian Wells in March this year.