French Open champion Ash Barty is eager to enjoy the moment as a Grand Slam winner as she prepares for her grasscourt campaign. 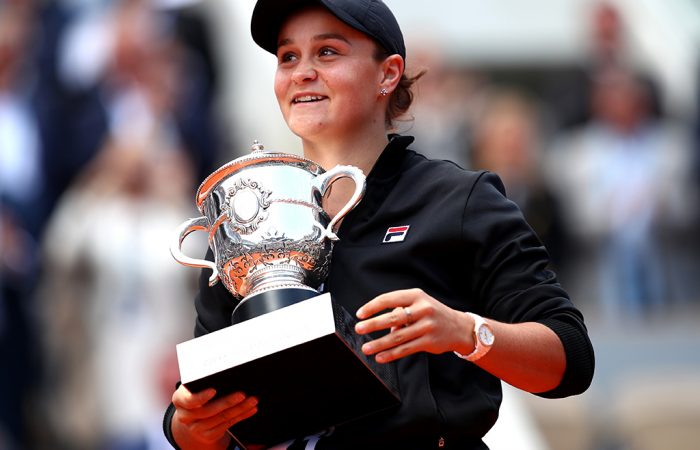 Ashleigh Barty has vowed to enjoy her new-found status as a Grand Slam champion rather than worry about the pressure of expectation as she heads into her favourite part of the season.

The Australian has climbed to No.2 in the world rankings after surprisingly winning her first Slam singles titles on clay at the French Open last Saturday.

Barty had always been considered at her most dangerous on grass, having won the Wimbledon junior title aged 15, and she will return to action on the surface at the Nature Valley Classic in Birmingham next week.

NEWS: Barty rises to world No.2

The 23-year-old had her first hit on Thursday after spending time with her family, whose journey to the UK from Australia unfortunately did not allow them to make it to Paris, playing golf at The Belfry and watching the cricket and women’s football World Cups.

“It’s a unique situation, it’s an incredible situation,” said Barty, who defeated Marketa Vondrousova in the final at Roland Garros.

“We’ve worked so hard to try to put ourselves into these positions and now that it’s here it’s just about enjoying it, it really is.

“I may never get the opportunity again. I’ll continue to try to work and do everything as well as I possibly can to put myself in another situation.

“It’s been an incredible journey over the last three years for myself and my coach. I’m just excited to be able to try to use all of the experiences I’ve gained and the things I went through in Paris to continue to try to move forward.

“I feel good. We’ve had a few days to relax and step away from the court. I jumped back on the court yesterday and got back into training. We’re ready to go again.”

Barty’s success in Paris meant she opted against defending her title in Nottingham this week and she will hope to go one better in Birmingham than two years ago, when she reached the final before losing to Petra Kvitova.

Kvitova, the winner for the past two years, withdrew this week as she continues to recover from an arm injury, but Edgbaston hosts one of the strongest fields in its history, with the world’s top three of Naomi Osaka, Barty and Karolina Pliskova all in action.

Barty said: “I love the courts here. Hopefully it stays dry first and foremost. I know that it’s going to be a bit of a challenge changing surfaces so quickly.

“I’m not going to play my best tennis every day, but I can guarantee we’ll be doing all the right things to give myself the best chance.

“It’s a fresh start, it’s a clean slate. A new season jumping on the grass. This is the time of the year I love playing tennis.”