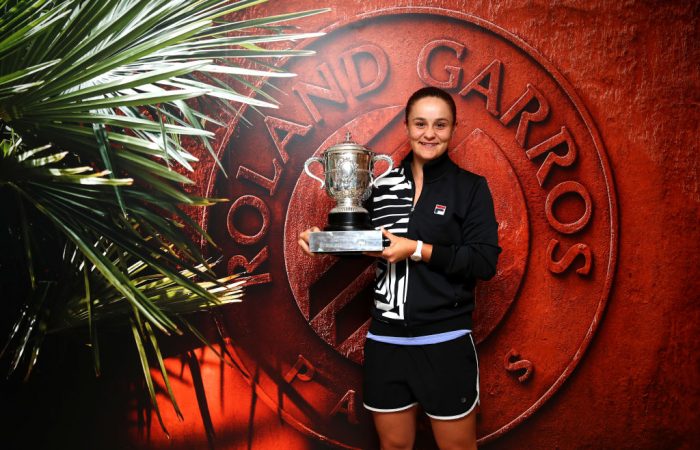 https://twitter.com/CathyFreeman/status/1137501825148411904Legends, fellow Australian and WTA players, as well as  stars of the entertainment world were quick to congratulate Australia’s Ash Barty after she lifted a first Grand Slam singles trophy at Roland Garros.

Billie Jean King was among the first to take to Twitter, with Rod Laver equally delighted by his fellow Queenslander’s major breakthrough.

Congratulations to #RG19 champion, @ashbar96! The first major win is so sweet. Proud of you! 🇦🇺 https://t.co/pQ4VLUQCHS

Congratulations @ashbar96 – I am so proud of you champion. Rocket 🚀 pic.twitter.com/d7L12V24Ty

Sam Stosur, Australia’s most recent Grand Slam singles champion at the 2011 US Open, was thrilled with her Fed Cup teammate’s success.

John Millman, Daria Gavrilova, Alex de Minaur and Priscilla Hon were among the other Australian Fed and Davis Cup players to show they were similarly proud.

I’ve known Ash for a long time and she’s always been special. Winning a French Open title doesn’t confirm what we’ve always known. So happy for @ashbar96, @CTyzzer and her family for this. #queenslander pic.twitter.com/yErk8chuYW

Had to really restrain myself from messaging Ash about how excited I am all this week to not jinx her. Happy it's all over now for me😂😂😂 I'm gonna go crazy with the messages and the gifs now!!! Freaking congrats @AshBar96 and the team! Idol 🥰

Congratulations @ashbar96 so happy for you! Enjoy that beautiful trophy ❤️🏆@rolandgarros #RG19

Some amazing tennis this tournament from @ashbar96 – congrats girl you deserve this!! Now go enjoy it! 👏🏾💫 #RG19

Congratulations @ashbarty on your incredible and well deserved victory at @rolandgarros 🤗

And to my fellow Czech leftie @VondrousovaM – what an amazing tournament you had! 👏🇨🇿

Current and former doubles partners, Victoria Azarenka and CoCo Vandeweghe (who teamed with Barty for a first Grand Slam win in the 2018 women’s doubles event) were similarly excited by Barty’s biggest career win.

After earlier congratulations from Australian Hugh Jackman in reaching the final, there was also an outpouring of support from other Aussie celebrities and sporting stars.

And to hear her speak. She is GOLD. An amazing ambassador for Australia. https://t.co/XrVrTS7KLO