Ash Barty is through to her first Grand Slam semifinal after beating Madison Keys at the French Open. 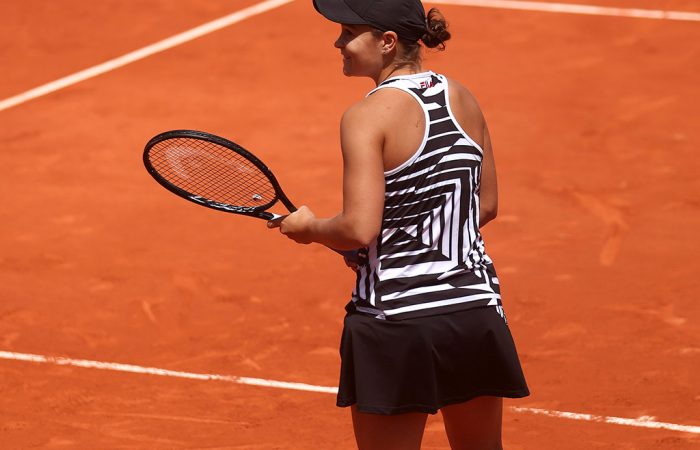 Australia’s Ash Barty is one win away from a place in the French Open final after dispatching Madison Keys 6-3 7-5 in her last-eight clash on Suzanne Lenglen Court.

Barty avenged her defeat by the American world No.16 at Roland Garros in the opening round two years ago to reach the semifinals of a Grand Slam for the first time.

She will play 17-year-old American Amanda Anisimova, the world No.51, who stunned defending champion Simona Halep 6-2 6-4.

“I felt for myself and my team, we have approached this claycourt season a little bit differently to others. I’ve really enjoyed it, embraced it. I’ve been playing some pretty good tennis.”

World No.8 Barty took out the first set against Keys in under half an hour after converting her fourth set point and clinched the match on her first match point.

The 23-year-old from Queensland looked in control throughout and even managed to overcome a hiccup in the second set when Keys broke her as she was serving for the match.

Barty responded magnificently against last year’s semifinalist and broke straight back before closing out the match.

Despite being on the receiving end of eight aces, Barty’s return game was solid throughout as she won 40 per cent of her receiving points and converted 80 per cent on her own serve.

“I think that’s probably close to my best match that I have played over the last month on the clay, for all of one little blemish there trying to serve out the match in the first time,” said Barty.

“It was a really clean match. I felt like I was in control. I got the balls I wanted, and I was able to put the balls in difficult positions for Maddie.

“Really, really happy with how we went about it.”

Following the rain that washed out the whole of Wednesday’s schedule, Barty must now play three matches in as many days if she is to become the first Australian to reach the final in Paris since Samantha Stosur nine years ago.

Barty is the highest-ranked player left in the draw at No.8, with 19-year-old Czech Marketa Vondrousova (38) taking on Britain’s Johanna Konta (26) in the other semifinal.

“I think they have played an incredible tournament obviously to be in this position, and they’re enjoying it,” added Barty.

“I think it’s an opportunity for all four of us to go out there and try and continue that.”