Daria Gavrilova and Ellen Perez combine to win the doubles title at the Strasbourg International. 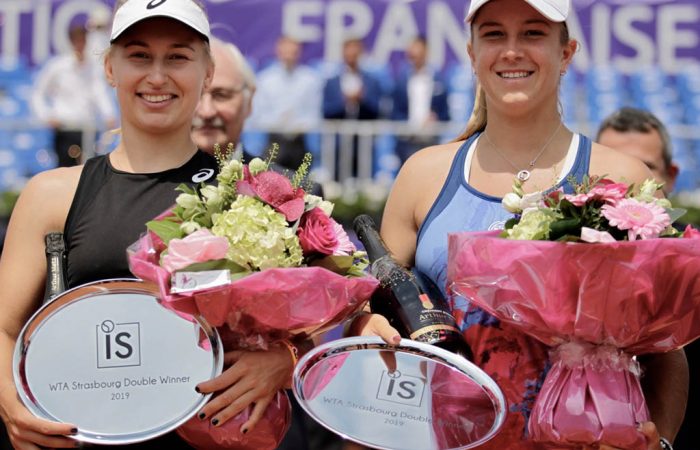 Daria Gavrilova and Ellen Perez took full advantage of a late entry into the Strasbourg doubles draw by taking the title in Saturday’s final.

The pair, who had beaten second seeds Eri Hozumi and Makoto  Ninomiya in round two, completed an impressive week with a 6-4 6-3 victory over Yingying Duan and Xinyun Han.

“It’s the second time I’ve won a title as an alternate (doubles partner),” she said.

“It was a last-minute decision, but I’m really happy. I think I’ve gotten better every day and am still improving.

“It’s a real positive and nice to go to Paris with a win.”

Gavrilova also reached the singles quarterfinals and next heads to the French Open, where she will face Aleksandra Krunic in round one.

The pair were born less than a year apart in Moscow, with Gavrilova now a proud Victorian and Krunic representing Serbia.

Gavrilova said her opening Roland Garros assignment – on Monday or Tuesday – would present a unique challenge.

“I’ve known Krunic since we were little, we’re really good friends and were actually having dinner in Rome, having a deep conversation and I said, ‘No we’re going to play each other soon’ and I jinxed it,” said Gavrilova.

“It’s going to be tough; she is a tricky opponent and it’s always tough playing a friend.

“Some players actually lift their games and I think that’s going to happen.”