Pick up a racquet to help live a longer, healthier life 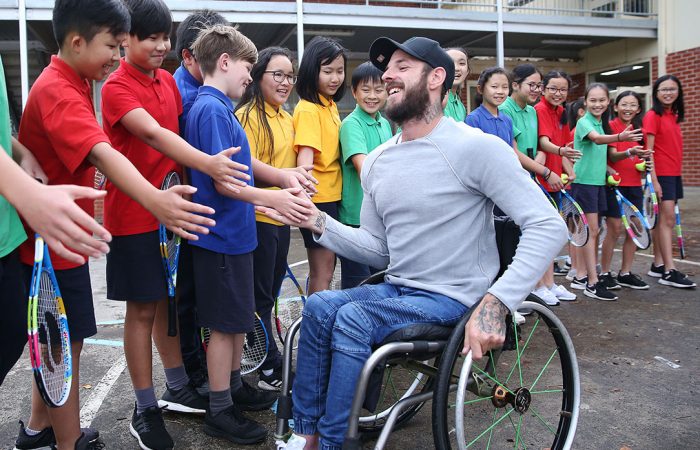 An extensive 25-year observational study has confirmed that racquet sports, including tennis, can increase life expectancy by almost 10 years.

The news comes as the third annual ANZ Tennis Hot Shots Racquet Roadshow launched in Victoria and ANZ announced an extension to their longstanding partnership with Tennis Australia.

“We’ve always known tennis is a fantastic sport for people of all ages and abilities to play as part of living a healthy lifestyle, and the ANZ Tennis Hot Shots program is a fun way to get kids active,” three-time Paralympic gold medallist Dylan Alcott said.

“It’s extraordinary to think that playing tennis can add almost 10 years to your life and I’m sure this is a statistic that will encourage more families and kids to pick up a racquet and get out on court.

“Having the opportunity to put racquets in the hands of so many kids is a great way to motivate them to get outside, get active and have a hit with their friends.”

Thanks to ANZ’s ongoing support, the ANZ Tennis Hot Shots Racquet Roadshow will have delivered a staggering 140,000 racquets to first year primary school students by the end of 2019.

“Many of our customers and staff are passionate about tennis and we’re thrilled to be renewing our significant support of tennis in Australia. This program enables us to support the sport throughout hundreds of Australian communities,” ANZ Group Executive, Australia Business and Private Bank, Mark Hand said.

“We’re committed to growing this sport across the region and ANZ Tennis Hot Shots is a continuation of our investment into grassroots participation.”

Launching the ANZ #TennisHotShots Racquet Roadshow – our third year in a row!

Thanks to @ANZ_AU for your ongoing support and St Joseph's Primary School for being such great sports today. 140,000 racquets will be delivered to primary schools by the end of 2019. Let's roll 🎾 🙌 pic.twitter.com/jPNenvi4re

“As a national sporting body, we have an opportunity to make a positive contribution to getting kids active. I believe tennis is uniquely placed to help put an end to the inactivity crisis that is currently facing this next generation of children in Australia,” Tennis Australia’s Chief Tennis Officer Matt Dwyer said.

“By introducing a racquet to these children in their formative years at school we can help play a role in their approach to physical activity and create lifelong memories through tennis, and with the recent research that suggests tennis can add a further 9.7 years to your life, why wouldn’t you start playing?

“We’re proud of our partnership with ANZ and grateful for their ongoing support of tennis and their commitment to growing the game at all levels.”

“Whether it is the social interaction or the physical activity component of the sport that contributes to the longer lifespan, the findings are very encouraging for people of all ages taking up the sport of tennis.”

Grassroots tennis will continue to be in good hands as ANZ confirm the extension of their partnership with Tennis Australia.

ANZ’s multi-year partnership extension will broaden to include a presence at the ATP Cup and WTA events in January in the lead up to the Australian Open, as well as continue to have a focus on community and grassroots throughout the year.