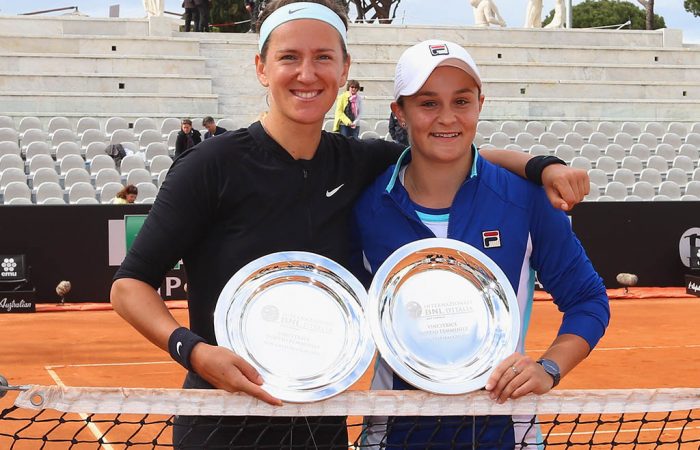 Ash Barty picked up another trophy in her outstanding 2019 as she retained the Italian Open doubles title – and also hit a new career-high in singles.

The 23-year-old Queenslander teamed up with Victoria Azarenka to take the title in Rome, seeing off Anna-Lena Groenefeld and Demi Schuurs 4-6 6-0 10-3 in Sunday’s final.

It was a familiar feeling for Barty, who had lifted the trophy 12 months earlier alongside Schuurs.

“Back to back in Roma!” she said on Twitter, later telling wtatour.com: “There were ebbs and flows a little bit, a few momentum changes in the match.

“But I think that the way we started the second set, in particular, we were able to keep the foot down, keep the momentum going through the tiebreaker as well.”

And despite a third-round loss against Kristina Mladenovic in singles, Barty rises to a career-high ranking of world No.8 in Monday’s updated standings.

She next heads to Strasbourg for the final week of preparation ahead of the French Open, with fellow Aussie and Fed Cup team-mate Daria Gavrilova her first-round opponent.

Back to back in Roma! 🏆🇮🇹
Awesome week with this Superstar 🌟@vika7 #10 pic.twitter.com/7bBKxVXdB4