Ash Barty's three-set victory over Danielle Collins sends her through to the last 16 at the Mutua Madrid Open and extends her winning streak to 10 matches. 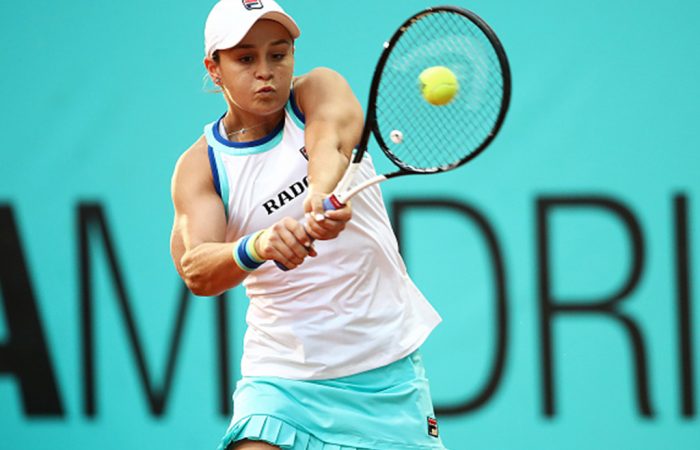 Australian Ash Barty’s fine form in the lead-up to the French Open continued with a 10th consecutive victory.

The world No.9 defeated American Danielle Collins 6-1 1-6 6-1 to advance to the third round of the Madrid Open for the first time.

Barty has taken to the red clay in the Spanish capital in her first tournament since claiming the Miami Open – the biggest title of her career – in late March, and winning all three of her matches in the Fed Cup semifinal, including both singles rubbers.

[email protected] grabs her 🔟th consecutive win in the @MutuaMadridOpen second round!

On Tuesday, Alex de Minaur and John Millman will begin their campaigns at the Madrid Open.

De Minaur is chasing a first win on clay this year when he faces Polish qualifier Hubert Hurkacz in their opening-round encounter in the Spanish capital, and his compatriot Millman will take on American Steve Johnson.

World No.27 De Minaur was a shock first-round loser in Estoril last week while world No.48 Millman was forced to retire due to injury in his second-round clash in Portugal.

Barty, after dominating the first set against Collins, found herself in trouble in the second before she rallied to close out Monday’s match in an hour and 25 minutes.

Barty blasted 18 winners but threw in 19 unforced errors during the topsy-turvy encounter.

The 23-year-old fired five aces but only made 55 per cent of her first serves while she converted four of eight break-point chances.

Barty applied heavy pressure from the start, reeling off five games in a row to put Collins, who has only three WTA main draw wins on red clay, on the back foot.

Collins responded by taking the last five games of the second set to level up the match.

But Barty regrouped and quickly rallied to a 3-0 lead before the world No.30 Collins got on the board in the final set.

The Australian No.1 continued her run by reeling off the final three games to set up a round of 16 showdown with Kazakh Yulia Putintseva, who beat Pauline Parmentier 6-4 4-6 6-3.

Barty and Putintseva have never met on tour, although Putintseva did win their only meeting on the ITF junior tour in Traralgon in 2011.