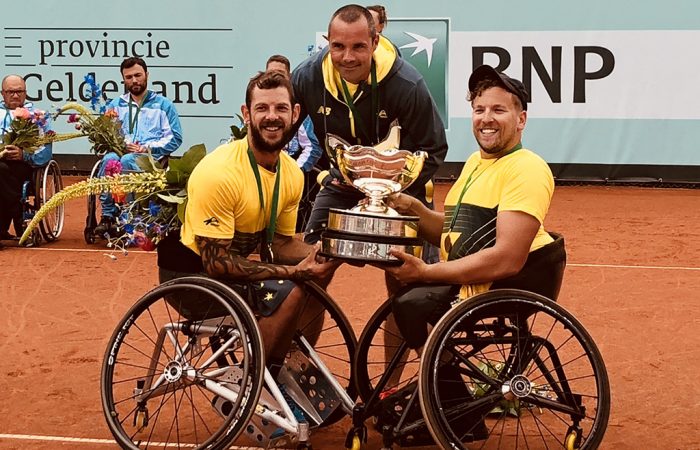 Francois Vogelsberger, who works with top-five wheelchair tennis stars Dylan Alcott and Heath Davidson, is one of those select few.

Overseeing two players whose careers are at distinctly different junctures, yet which significantly overlap, is something of a balancing act for the French coach. Alcott is the superstar charge, the reigning Australian and US Open champion and world No.1 with a burgeoning media profile in both Australia and abroad. Yet fifth-ranked Davidson, according to Vogelsberger, is closing the gap on the court.

“He’s working very hard on the mental aspect of the game at the moment. He’s getting help with the Victorian Institute of Sport, because he’s on a scholarship there. He’s making huge improvements in training, he’s working really hard,” Vogelsberger said of the 31-year-old, who only returned to tennis in 2016 after an absence of nearly 11 years.

“Transferring these improvements in training to a semifinal of the Australian Open (is a challenge). But he’s got big potential, and he realised it, and he’s disciplined in training. He’s getting better and better.”

Davidson contested the Australian Open but was eliminated at the round-robin stage of the tournament. Alcott went on to win it, two days after he and Davidson combined to win the doubles crown. The duo are frequent and successful doubles partners who also teamed to win quads doubles gold at the Rio 2016 Paralympics and 2018 World Team Cup. 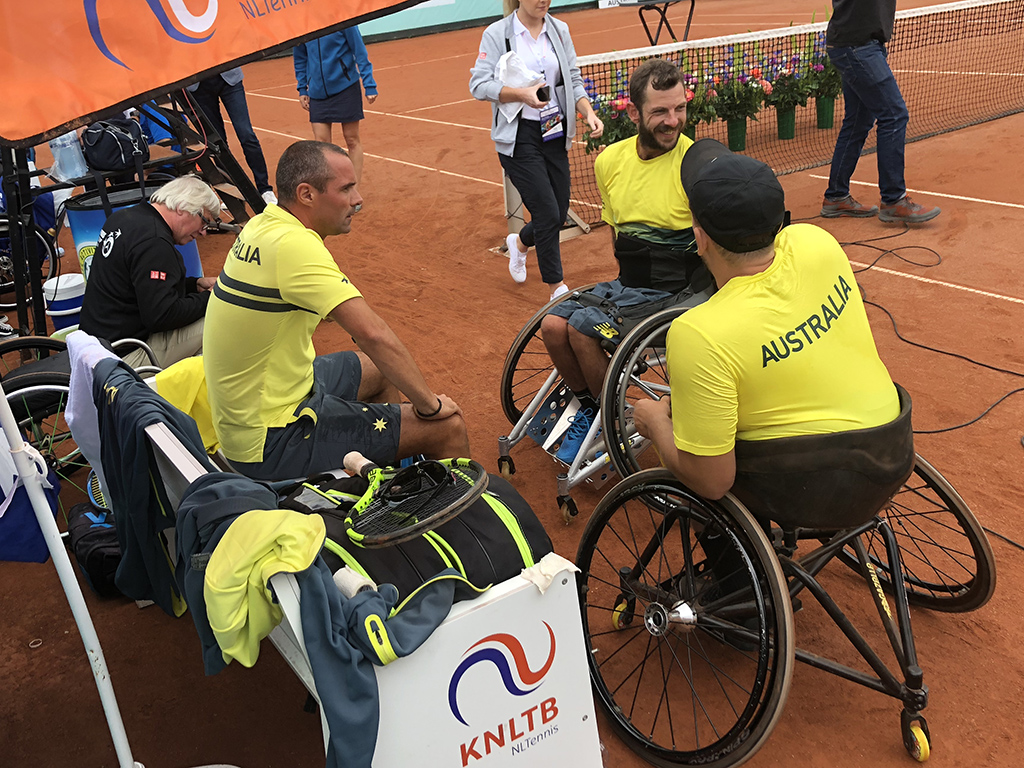 Since Australian Open 2019, Alcott has played just one event – winning the Japan Open in late April – and has played just three tournaments this season. He is yet to lose a match, and remains undefeated since losing in the semifinals of the USTA Championships eight months ago.

With a vast array of media, sponsor and business commitments, Alcott is effectively now a part-time player. Vogelsberger says the 28-year-old has only recently learned to strike the right balance to ensure he still competes at the highest level possible during tournament weeks.

“After Rio (where Alcott also won singles gold) he took some time off and he wasn’t competing and wasn’t training,” revealed Vogelsberger, who has worked with Alcott for more than four years.

“You can bring a horse to the pond but you can’t force them to drink. I knew that the US Open was coming up. But I said, OK, I’m gonna leave the experience (to him) and he’s gonna understand with the experience.

“He came to the US Open, hadn’t played, and he was shocking. And I think that experience helped him realise: maybe I can tweak my schedule, but I still need to train. Because if I don’t do that, I can’t win.

“We had the discussion after that US Open, tried to lock (in) some training sessions, and lock time during the day where he doesn’t take any media commitments.”

Even as recently as a year ago, Alcott was still striving to effectively juggle all of his commitments. Yet those elements were finally in harmony when he charged to his fifth straight Australian Open title at Melbourne Park in January.

“If we stick with the plan, he will be competitive,” Vogelsberger said.

Whereas Alcott has played just eight matches in 2019, Davidson has played 25, notching 15 wins across eight tournaments.

Vogelsberger accompanies Davidson and Alcott on the road to events at which they are both competing and also travels with his players individually when their schedules diverge, such as when Davidson completed in Georgia and Louisiana in the US, as well as South Korea, following the Australian Open.

Davidson and Alcott’s schedules will link up again at May’s World Team Cup in Israel and take them through Roland Garros – where the quad division will feature for the first time – and Wimbledon, where the quad event has been awarded official status after debuting last year as an exhibition.

“I spend more time with Heath (on the practice court) because Dylan’s got other commitments,” Vogelsberger explained.

“I try to spend quality time with them, one-on-one, during the entire (training) week, except once a week they play against each other. Or their sessions might sometimes overlap for 15-20 minutes. It’s just always a communication and discussion and to see their point of view. I think it’s been well received by them and they’re pretty happy with that (arrangement).”

Vogelsberger worked with both wheelchair and able-bodied players in England for eight years before coming to Australia, and prior to that worked as a tennis administrator as well as a hitting partner and coach in France.

His work with wheelchair tennis players is quite specific. They can play with an ‘inverted’ backhand, also known as a ‘reverse’ or ‘pronated’ backhand. Because mobility is limited compared with able-bodies players, movement pattern training is different and playing tactics shift. Drive volleys are favoured over traditional volleys while wheelchair players’ lower net clearance dictates serving technique and strategy.

“There’s also the set-up of the chair; for Dylan we choose for him to be quite low on his chair to maximise his mobility,” Vogelsberger explained.

“We did some tests with speed of serves, and what you gain on serve speed if you are like 5-7 centimetres higher is negligible, compared with what you lose in mobility. Often a lot of players want to be taller to have a bigger serve, but actually it’s not that big a difference and your mobility is not as good.”

In addition to Alcott and Davidson, Vogelsberger works with Martyn Dunn, a 26-year-old who is ranked No.106 in the open men’s division of the wheelchair tour. He also helps veteran coach Greg Crump in nurturing Australia’s junior wheelchair tennis talent.

“Between Heath and Dylan, what saved me is they’re best mates. Otherwise it would have been a nightmare (juggling them),” Vogelsberger said.

“The advantage is you can create a competitive environment in the training scenario for them to try to get better. I’ll take them one on one, or with Marty (Dunn), because if you do too much playing against each other, then at one point it explodes, because maybe one doesn’t have what he wants.

“And after, when they play against each other in tournaments, I just step back and watch and clap. So they sort themselves out.”