Molik: we’ve got the depth to win Fed Cup

After beating Belarus 3-2 in an electrifying semifinal in Brisbane, Australia now turns its attention to the Fed Cup final against France on 9-10 November. 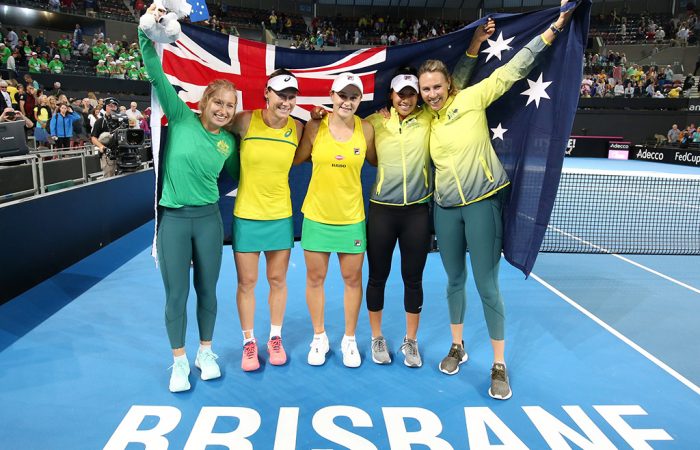 For the first time in 26 years, Australia will compete in a Fed Cup final, aiming for a trophy the nation has not lifted in 45 years.

The Australian team, led by the magnificent Ash Barty, defeated Belarus 3-2 before an atmospheric crowd in Brisbane and will now line up against France on 9-10 November in a home tie.

Barty won all three of her rubbers for the second straight tie, winning two singles matches in straight sets and teaming with a revitalised Sam Stosur in a high-quality live doubles rubber against Victoria Azarenka and Aryna Sabalenka.

Australian captain Alicia Molik that while reaching the final is an unfamiliar feeling, it’s something she has imagined.

“We’ve established this great momentum as a team, the team bonding and feeling. We’ll try and carry that – I think it will give each player energy for the rest of the year.

“We’ve set our sights on winning the Fed Cup – I don’t remember anyone talking about (just) making it to the final, which is a good thing.

As to where the final will be played in Australia? That remains to be seen.

Molik said there were a lot of conversations that needed to take place between now and November’s final.

“I know it’s a minimum (stadium size) of 5000 that is required for the tie. Traditionally what we’ve liked to do is share it around Australia,” she said.

“We’ve been quite vigilant with going to (different) major cities and regional areas – we won’t rule out anything.

“The good thing is we have a bit of time now. But Queensland has been brilliant, Brisbane amazing. I think we had the biggest crowd for Fed Cup playing in Australia yesterday, that’s phenomenal. On an Easter weekend, that’s pretty difficult.

“Also a lot of families and kids here this weekend – how fabulous for them to watch role models like this. Top level women’s tennis in Brisbane. Just incredible.”

Barty, who also tipped her hat to the electrifying atmosphere in her home city, acknowledged the journey the Australian team had taken to arrive at this point of the competition.

“It’s important not to forget that there are other players – like Kim, Astra and Casey – who are a part of this as well, players over the last two years (who helped us) to get to this point,” she said.

“It’s a want from all Australian players to show we are a powerhouse nation.”