Australia's Ash Barty will take on new doubles partner Victoria Azarenka of Belarus in the second singles rubber on Saturday in the Fed Cup semifinal. 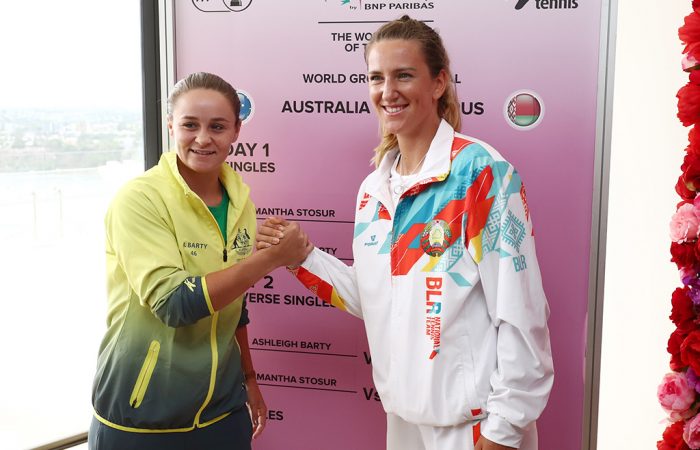 Ash Barty expects plenty more from doubles partner Victoria Azarenka than her misleading ranking suggests when the pair play for just the second time in a Fed Cup semifinal in Brisbane.

Belarusian Azarenka was a late arrival for the tie starting on Saturday but, like Sam Stosur for the hosts, has won a singles spot ahead of higher-ranked teammates in a nod to her experience.

The 29-year-old is a former world No.1 who has won both the Australian Open and Brisbane International twice.

Currently ranked 61st in the world, the charismatic star is back to near her best after the birth of first child Leo in December 2016.

Barty, who has surged to world No.9, has struck up a friendship with her opponent, reaching a Miami Open doubles semifinal with her three weeks ago.

“She’s a Grand Slam champion and that’s the way she conducts herself on court and particularly in Australia where she’s had some of her best results,” Barty said.

“In a way it’s remarkable what’s she’s been able to do after having Leo.

“Regardless of the number next to her name she fights and prepares like a Grand Slam champion.”

Azarenka beat Barty 6-4 6-2 in Tokyo last September in their only career meeting.

“But I’ve hit a few more balls with her and got to know her a lot better (since).”