We caught up with Astra Sharma this week in Bogota, where she is preparing for her first career WTA quarterfinal against former world No.5 Sara Errani. 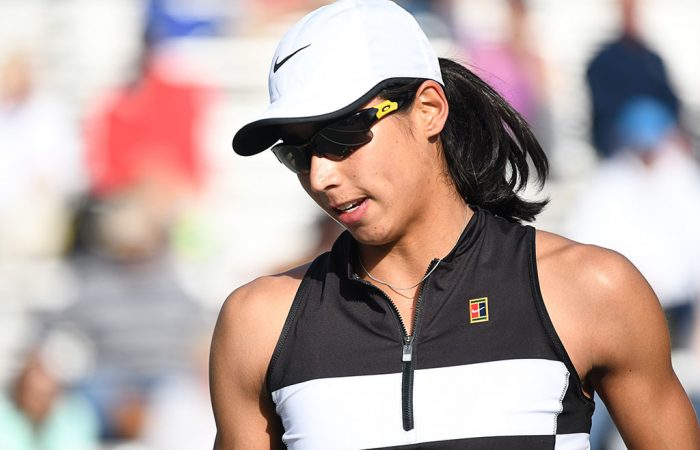 Astra Sharma on Friday (local time) will take on former world No.5 Sara Errani in her first WTA quarterfinal in Bogota, Colombia.

It’s the continuation of a marvellous season for the 23-year-old from Perth, who in 2019 has won 13 of 17 matches and improved her ranking almost 100 places.

Projected to rise to world No.120 following her latest run, and higher still if she beats Errani, Sharma is for the first time enjoying the spoils that come with competing at WTA level.

She chatted with tennis.com.au from Bogota about her experiences on tour and some of the factors behind her impressive rise in the game.

How have you found the experience of competing more regularly on the WTA circuit this year?

“It’s been very fun, and very challenging playing some really highly-ranked players. It’s been quite a journey. Obviously being in that upper tier is really nice – you get treated a lot better and everything’s made a lot simpler for you. At WTA events, meals are usually provided, transport is organised for you, sometimes hotels are paid for, depending on how you go. Practice balls, towels and water are all given to you by the WTA. At ITF events you have to organise those things yourself. For sure you get a little more time to relax and think about your tennis – you get a bit more breathing space. It’s been fantastic.

“It’s been a very good run for me, and I think I take that with a lot of gratitude and a lot of respect, because I know it wasn’t easy, and it’s not easy to replicate – I don’t expect to but I certainly hope that I can. Just looking back, it’s been exactly what I hoped for, just trusting my process, not thinking too much about the ranking – in fact, I barely track my ranking. It’s a good tool to get into tournaments but at the end of the day I wanna keep putting myself in positions where I’m playing the top players and the ranking essentially allows me to do that, which I’m grateful for.”

What would you say has been behind your rapid improvement this season?

“I think I learn a lot quicker from a loss. I’m really good now I think at isolating what I need to work on and then pulling that out and getting really specific in practices. The process is hard work and dedication, but with a much more high-level specificity. We all have good forehands and backhands and volleys, but if I can just pull out a certain shot and be like, this is what I’ve not executed – I can execute it 70 per cent and it’s pretty effective, but I want to be able to do it at 95 per cent and have it be even more effective.

“It’s about improving what I have and definitely these matches (at WTA level) expose what my weaknesses are. It’s not a discouragement – for me it’s more like, good, this is what I need to get back on court with, and next time I want to be able to step on court and know that I’ve done the work on that and it’s not gonna bother me any more, and patch up all those little holes and leaks in my game.

If you’re happy to go into some detail, what are those ‘leaks and holes’ in your game?

“I might tweak something in my routine between the points, and practice that. Or I might feel some tightness in a situation and going back onto the practice court I do a lot more point-based drills, where I replicate that kind of tightness and try to isolate it and work through a routine which gets rid of it.

“I think I’ve improved a lot on my backhand side; it’s a lot more solid and a bit more of a force now and not so much a defensive shot. The intent behind it is a lot sharper. I think basically my intent behind my game is getting a bit more clear; I’m more aware of my court positioning, more aware of the effect of my ball and what it’s doing to the other girls. And capitalising on that I think is something I’ve gotten a little bit better at that.

Can you talk a little bit about the team you’ve got around you at the moment?

“My coach Geoff (MacDonald) still works as the college coach for Vandy (Vanderbilt University), but whenever I’m back there (in Nashville, where she is based) he’ll work with me as much as I want or as much as I need, and I send him video of my matches and he’ll go over it with me when I’m on the road.

“Obviously I tap into the Tennis Australia coaches when I’m on the road, because Geoff can’t really travel until college is over in the summer. That’s how it’s working at the moment. (On the road) some weeks it will just be me, but a lot of the weeks, they’ve done a good job of having a Tennis Australia coach on the road, and I’ll tag-team with them so I can have someone kind of be the eyes and brain and just give me some feedback with what’s going on in my matches.

“Nicole Kriz was there in Charleston, I was working with her a bit; this week in Bogota Lou Pleming is on the road with Zoe Hives, but they very graciously let me tag team with them, since I’m also playing doubles with Zoe, so it helps for that too.”

What would make 2019 a successful season for you?

“I could cut the year right now and say it’s been successful (laughter). I have done really well, but to be honest, to say (the season was) really successful, I would love to see myself qualify for another Slam – that would be what would define it as successful, yeah.”