Jaymon Crabb, coach of Jordan Thompson, says changes to Thompson's mindset and the added confidence of winning ATP matches has seen the Sydneysider soar in 2019. 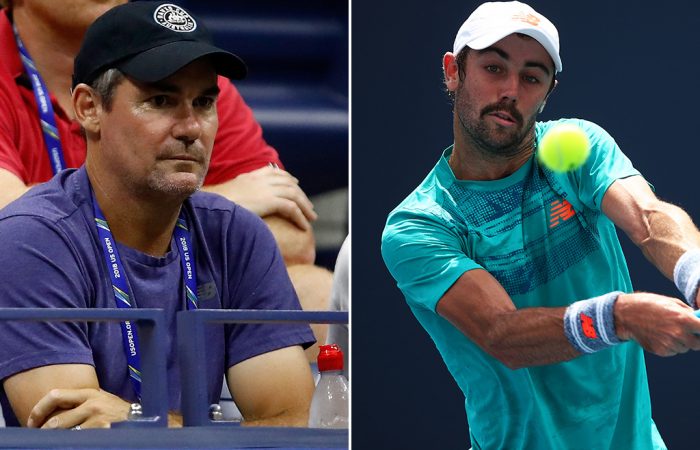 Jordan Thompson is closing in on a career-high ranking after a brilliant start to season 2019.

The 24-year-old has already reached two ATP quarterfinals and most recently advanced to the fourth round of the Miami Open, stunning 10th seed Karen Khachanov and No.24 seed Grigor Dimitrov along the way.

Ranked outside the top 100 in late October last year, Thompson is currently up to 67th, and looking to better his career-best mark of No.60.

It’s a situation far different to 2018; despite sustained success on the Challenger tour, Thompson managed to win just one ATP-level main draw match all season.

“I think last year it was pretty well publicised he only had one tour win and made a lot of his points in challengers,” said Thompson’s coach Jaymon Crabb in an interview with the ATP Tennis Radio podcast.

“We made the decision after US Open … he’d dropped to 110 or 115 and we wanted to make sure he was top 100 coming into the Australian summer. So he chose to play four or five challengers and finished off winning the last two and a reached final in his third last one, so he got his ranking down to under 80 and set him up confidence wise for a good summer and he’s continued that on.

“Getting those early wins in tour events to get the tour win monkey off the back, definitely helped him and he’s a lot looser in his matches now.”

After winning his first match of the year to reach the second round of the Brisbane International, Thompson has since reached quarterfinals in Sydney and New York, with a second-round finish at the Australian Open in between.

In eight ATP events in 2019, he has fallen in the first round just once.

Yet he hasn’t ruled out altogether playing in Challenger events – and there is a good reason for that approach.

“Thommo’s really good with working out the schedule and making sure he is main draw for Grand Slams, so he’s always looks ahead and works out how many points he needs; he’s good at mixing in challengers and tour events,” Crabb explained.

“Even now he’s entered in a few Challengers in China; Anning which is a 125k.

“It’s very mental and if you’re winning, you just sort of know how to win. A lot of these guys, when you’re ranked sort of 50 to 90 (like Thompson is), you might be playing tour events and you’re playing guys ranked above you every week so it’s very easy to go for a month or six weeks where you go 3-3 or 2-4 in six matches and you haven’t been playing bad or anything.

“So we always look to drop back when we have to and just keep the win percentage up.”

The Miami fortnight was a breakthrough for Thompson, by far his best result at an ATP Masters 1000 event.

Following a training week this week in Tampa, Florida – where he hit with Kei Nishikori – Thompson will next target the ATP tournament in Houston and the Challenger tournaments in China before heading to Europe for the red clay ATP event in Lyon the week before Roland Garros.

He’ll be hoping to maintain his current momentum, which Crabb believes has resulted from a change in mentality on the match court.

“He’s flattening out his forehand and being more aggressive with it; he can get a little passive in his matches,” explained Crabb, who also says Thompson has mixed up his serves well and looked to advance to net more in 2019.

“Probably at the Challenger level, he’s got unbelievable speed and he can make enough balls to win those matches, but at the tour level he needed to be more offensive and he’s added that to his game and he’s getting the results.”

Thompson’s next immediate goal is the world’s top 50, and beyond that it’s the top 32, which would mean a seeding at Grand Slam events.

Crabb believes he can get there, and says Thompson is great to work with.

“He’s very professional, he does all the right things for his body. If he needs the extra serves and returns he’s always willing to do them,” he said.

“He’s got a lot of variety in his game, so just scouting opponents and putting game plans together, he can execute that.

“I think for Thommo, seeing those guys who he trains with a lot (like Alex de Minaur, John Millman and Matt Ebden) make the break through to top 50 and beyond, sort of gives him the confidence as well that he can do it.”