Abbie Myers comes from behind to bundle out Romanian second seed in Canberra. 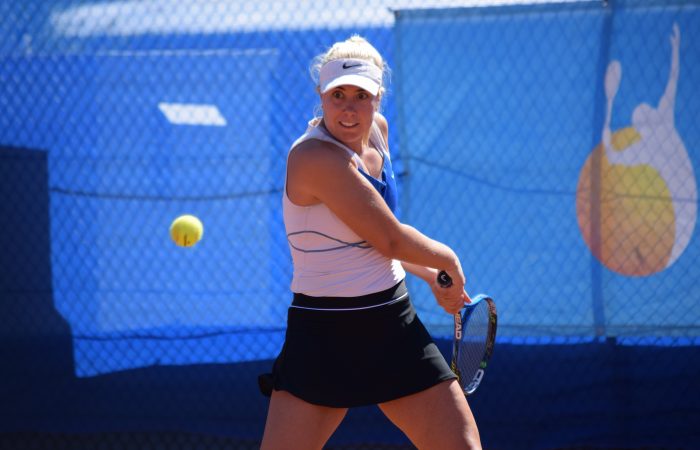 Abbie Myers has upset second seed Irina Maria Bara of Romania to reach the semifinal of the ACT Claycourt International #2.

After a significant rain delay, the No.8 seed from NSW found herself a set down on Friday, but recovered to take the match from the world No.165 in three sets, 4-6 6-3 6-2.

“I don’t think I was expected to win but I just kind of knuckled down and got through it,” Myers said. “I’m in pretty good form which is fantastic. In the first week, I had just come back from China and I got sick on the plane but this week I’m feeling really good and I’m pleased to get some wins under the belt.”

The 24-year-old has enjoyed a solid twelve months on tour after returning to the game and she currently sits at a career-high world ranking of No.273.

“Last year, these tournaments were just my second ones back or something, so it feels good to make that full circle and do so well here. But the whole year has been great – I did really well in Japan – I’ve had a few mixed results since then but I’ve been going from strength to strength.

“My whole game is going up but a huge part of it mental, just being able to stick it out in difficult situations.”

Standing in the way of a finals berth in the capital is Olivia Rogowska; while unseeded this week, the former world No.102 and multiple Australian Pro Tour titlist always poses a significant threat.

“It’s just business as usual for me,” Myers said. “If I can play like I’ve done so far, I’ll be in with a chance, so I’m just really excited to play.”

The remaining semifinal features top seed Priscilla Hon, who accounted for Cagla Buyukakcay (No.6) of Turkey 7-6(5) 6-4. Hon is set to take on Japan’s Miharu Imanishi, who took out her countrywoman Eri Hozumi.