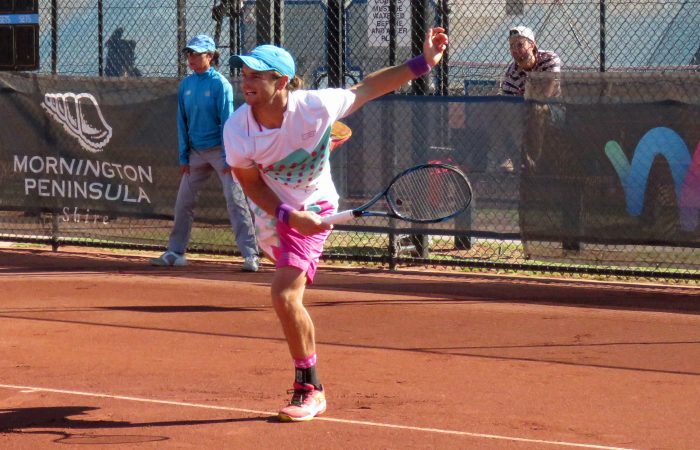 Top seed Jacob Grills has survived a thorough test to progress to the quarterfinals of the Mornington Peninsula Tennis International #2 on Thursday.

The Victorian started strongly, and seemed to be on his way to an easy win after taking the first set from Brandon Walkin, but the Queenslander quickly rallied to push the match to a decider. Grills held his nerve in the tense third set, eventually edging out his opponent 6-2 4-6 7-6(3).

“I was expecting a tough match to be fair. Brandon has a really big game style so I knew that it wouldn’t be easy,” Grills said. “I played a couple of good points right at the end there and drew a couple of errors out of him.”

The 23-year-old has enjoyed a successful period recently, making three consecutive ITF finals (two in Portugal and one in Doha) before returning to home soil.

“I chose to go overseas after the Australian ATP Challengers which was a bit of a gamble but fortunately I won a few matches,” he said. “Then I hurt my leg in Doha and ended up having a couple of weeks off, which is why I missed the first one in Mornington here.

“I was pretty shattered about that, right here in my backyard, but things have been good so far this week, the leg is pulling up well.”

Grills will now play qualifier Calum Puttergill – a three-set set winner over Lucas Vuradin – for a berth in the final four.

Last week’s champion, Harry Bourchier (No.2) and fifth seed Christopher O’Connell also moved ahead – along with Grills they are the only seeded players remaining in the draw.

Tasmanian Bourchier takes on Aaron Addison while O’Connell will play Luca Castelnuovo for the third time in quick succession, after he defeated the Swiss in last week’s Mornington semifinal.