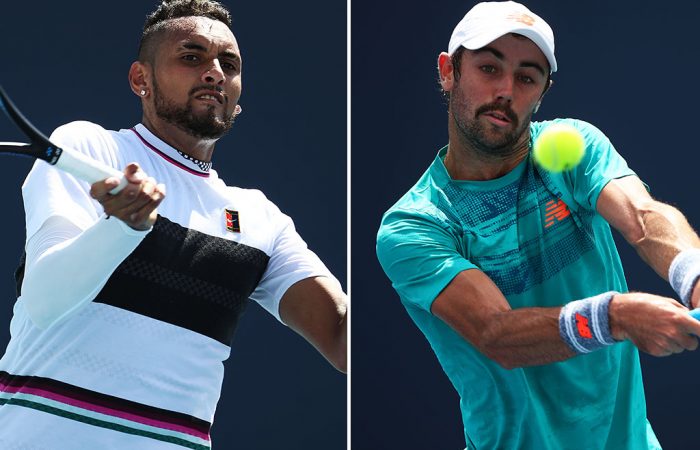 Australians Nick Kyrgios and Jordan Thompson have exited from the fourth round of Miami Open after losses on Tuesday.

Kyrgios, who required a visit from the trainer to strap his knee early in the first set, recovered from 3-1 down to take the opening set – and played a magnificent tweener in the process.

"One of the best hot dogs you will ever see"@NickKyrgios, that is OUTRAGEOUS 🔥#MiamiOpen pic.twitter.com/lCeCLJuJEy

Yet the Croatian worked his way back into the contest against the combustible Australian, going on to win in just under two hours.

It is the fourth time in four visits to Miami that Kyrgios advanced to the last 16 of the tournament; he went all the way to the semifinals in 2016 and 2017.

Despite the loss, he has nevertheless won seven of his past nine matches and returned to the brink of the world’s top 30.

Thompson, meanwhile, was appearing in the last 16 of an ATP Masters event for the first time in his career, and battled gallantly against Anderson.

The Aussie broke serve in the fourth game and went on to build a 4-1 lead in the opening set, before Anderson worked his way back with service breaks in the seventh and 11th games.

Another break late in the second set gave Anderson an opportunity to serve for the match, and he closed out that game to seal victory.

Thompson can take comfort from the fact that, after a breakthrough fortnight in Miami, he is projected to rise 10 spots to world No.67 – and back within striking distance of his career-high ranking of 60th.

Later on Tuesday in Miami, Ash Barty takes on Petra Kvitova for a place in the semifinals – and the world’s top 10.