Rinky Hijikata escapes a first-set battle to reach the second round at Mornington #2. 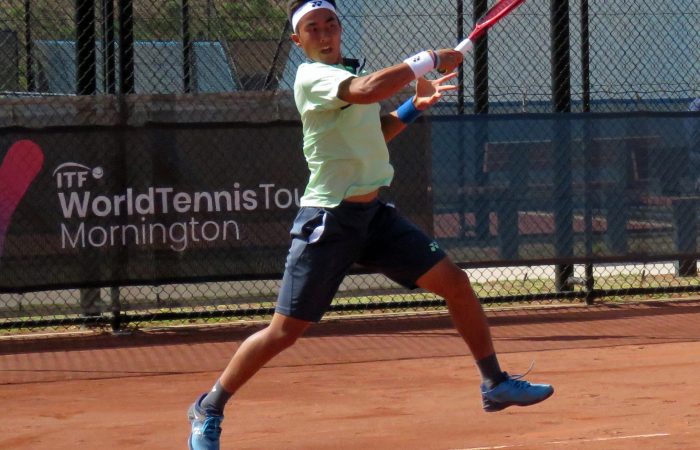 Teenage contenders Rinky Hijikata and Dane Sweeny consolidated their junior placing in the main draw of the Mornington Peninsula Tennis International #2 on Tuesday, both pulling off straight-set wins in their first-round singles matches.

Hijikata, 18, was tested early by fellow New South Welshman Cameron Green, who pushed him to a thrilling first set tiebreaker, which he eventually pocketed before edging away to progress 7-6(11) 6-3.

“It was really close,” Hijikata said. “He’s a tough player, he has a great serve and he’s aggressive from the back. He got up a break in the first set but I managed to get it back and then the tiebreaker was just really back and forth. It came down to a few points and I got a bit lucky. I was happy I managed to close it out in straight sets.”

Hijikata said he enjoyed playing consecutive weeks on the Australian Pro Tour in Mornington. “I’m feeling pretty good now. Last week was better for me, having back-to-back wins for the first time in a while. I will keep building on that.”

Following on from his doubles final appearance in Mornington last week, Queenslander Sweeny – also 18 – was untroubled in his first-round encounter, winning decisively against Victorian Stephen Kaldawi 6-4 6-4.