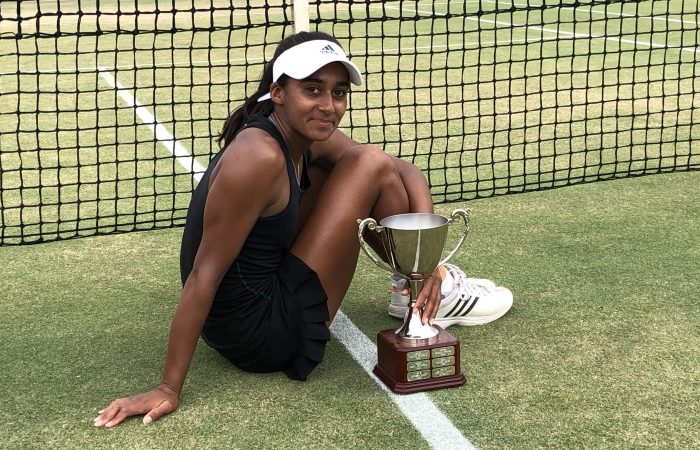 “It feels good to win my first $25K (ITF World Tennis Tour event),” Bains, 21, said. “I won a $15K a couple of years ago, but to do it on the grass, which is probably my favourite surface, is really nice.

“I also won the nationals (in Mildura) eight years ago to the day, so it’s a really nice feeling to do that here on the (Australian) Pro Tour.”

It was the sixth seed who took the early advantage and create opportunities for a straight sets victory, but McPhee (No.7) pressed to take the second set in a tiebreaker before Bains regrouped – after holding a 22-minute service game early in the decider – to take the championship.

“Kaylah played as well as I’ve seen her play, she definitely made it a tough match and I felt like it was a good quality final. I’m just glad I got the reward in the end,” said Bains.

It was a solid week for both players, with McPhee bundling out top seed Destanee Aiava in the quarterfinals and Bains defeating second seed Ellen Perez before ousting teenage Swiss qualifier Lulu Sun, who was aiming for her third consecutive Australian Pro Tour title after success in Port Pirie and Perth.

“Ellen’s a tough opponent,” said Bains, the current world No.285. “I lost to her the last time we played in Darwin. I played really well against Lulu too, who’s obviously pretty confident at the moment. I definitely had to work hard for those two wins but I’m glad I did.”

The women’s doubles final, played on Saturday, was an all-Australian affair with Olivia Rogowska and Storm Sanders battling it out with fellow unseeded duo Alana Parnaby and Alicia Smith. In the end, a match tiebreak was required to separate them as Parnaby and Smith claimed their maiden title together with a 3-6 6-3 [10-8] victory.