The Fed Cup draw for the World Group first round tie between USA and Australia has been conducted. The tie will kick off in Asheville, North Carolina tomorrow. 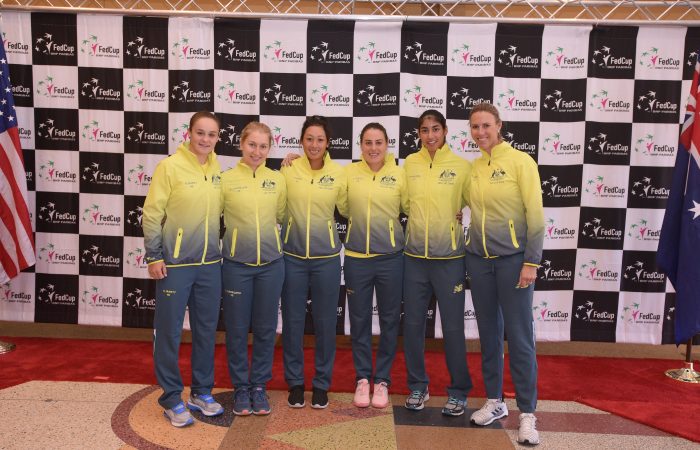 World No. 13 Ashleigh Barty (Qld) and [157] Kimberly Birrell (Qld) will lead Australia into Fed Cup battle this weekend when they face USA’s Madison Keys and Sofia Kenin on day one of the Fed Cup by BNP Paribas World Group first round tie in Asheville, North Carolina.

Barty, off the back of an impressive summer campaign where she became the first Australian female singles quarterfinalist at Australian Open in 10 years, will kick off the tie on Saturday, playing world No. 37 Sofia Kenin.

Barty is currently sitting at a career-high world No.13 and is the only WTA player with a top 15 singles and top 10 doubles ranking, she has a Fed Cup win-loss record of 11-2.

“There are no greater or better weeks in the year than when you get to wear Australia on your back and the green and gold… I think it’s a bonus that I get to have someone of Mol’s [Alicia Molik’s] calibre sitting on the side of the court with me. We chat through everything. We leave no stone unturned in preparation and I know when I go out on the court, I trust myself,” Barty said.

Kimberly Birrell will then face world No. 17 Madison Keys in the tie’s second rubber on Saturday.

Birrell’s selection caps off an incredible summer, where she reached her current career high ranking of world No. 157, made the third round of the Australian Open and scored wins over quality opponents [12] Daria Kasatkina, [30] Donna Vekic and [44] Kristina Mladenovic.

“I feel like I’ve had an awesome couple of months, I really feel like I’ve been playing at a consistent level day in, day out. I think I really proved to myself that this is the level I want to be at,” Birrell said.

“Belief does incredible things to athletes and tennis players especially. I feel very proud and can’t wait for the weekend.”

The reverse singles will be played on Sunday, with Barty facing USA nominated number one Madison Keys, followed by Birrell against Kenin.

“Ash obviously is our number one player, she’s had a wonderful summer, a great month without question, that’s why she is playing on the weekend,” Australian Fed Cup captain Alicia Molik said on her selection decision:

“Kim, to be honest with you, has been on fire. She demonstrated during the Australian Open what level she’s currently at and she’s brought that level here to Asheville with her consistently, day after day. That’s the reason that Kim is playing on Saturday…She has proven that she’s playing at that high level and we think she can win,” Molik continued.

In doubles, Australia will be represented by Ashleigh Barty and Daria Gavrilova taking on USA’s Danielle Collins and doubles specialist Nicole Melichar.

*All times are in local Asheville, North Carolina time (GMT-5)

Play commences at 1.00 pm local time on Saturday 10 February (5.00 am AEDT Sunday 11 February) and two singles matches will be played. The opening ceremony will take place at 12.45 pm local time.

The tie between Australia and the USA will be broadcast live and free in Australia on 9Gem from 5.00 am AEDT Sunday 10 February and Monday 11 February. Check local guides for more details.

Jelena Dokic, Sam Groth and Tom Rehn will be commentating.

Live scoring of the tie will be available at fedcup.com