Barty ready to ‘lead by example’ in Fed Cup

Ash Barty relishes the responsibility of being Australia's top-ranked player as the Fed Cup team prepare to face the USA. 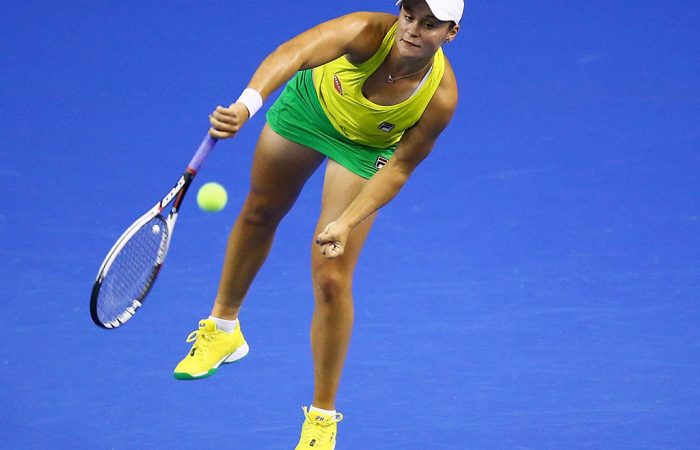 Ash Barty is ready to lead from the front when Australia’s Fed Cup team take on the USA in Asheville, North Carolina, this weekend.

Barty, the world No.13, will be the highest-ranked player on show for the World Group first-round tie at the US Cellular Center.

“I’m loving it and embracing it,” said Barty, who returns to action following her impressive run to the Australian Open quarterfinals last month.

“In my opinion it’s best to lead by example and I’m trying to do that in Fed Cup.

“Obviously it’s an extra challenge,” Barty said of playing an away tie.

“When you play at home in Australia the crowd is exceptional and I think we are expecting a full house here in Asheville, and they will be cheering for the Americans, but even without the crowd it’s special to be playing with Australia written on your back.”

Gavrilova is hopeful that her form is returning after heading to Asheville off the back of defeat by Maria Sharapova in St Petersburg.

“I stopped focusing on the injuries and niggles that I’ve been having and I just went out there, ran for every ball, fought really hard and even though the score line doesn’t seem it was a close match, it actually was a really close match,” she said.

“I believed that I could win and truly fought for every point.

“I need to get back on dictating with my forehand and moving around more to try and find it. Trusting my serve more because I feel like it has improved technically.”

Gavrilova has also been enjoying the positive attitude around a team that includes three players – Hon, Birrell and Sharma – with just one Fed Cup appearance between them.

“They’ve been so good this week,” said Gavrilova.

“We’re all training really hard and all really competitive, which is good. These girls are going to do so much damage on the tour this year.

“We like to play and schedule our tournaments together and we always support each other. We have a really great team and really great upcoming players.”

Australia captain Alicia Molik and US captain Kathy Rinaldi will announce their singles and doubles players on Friday (Saturday AEDT).

The first two singles rubbers are scheduled for Saturday (Sunday 5am AEDT).