Our summer’s not finished yet, says Hewitt

After an excellent summer of tennis for Australia's top men, they're not content to rest on their laurels, turning their attention squarely to the upcoming Davis Cup tie against Bosnia and Herzegovina in Adelaide. 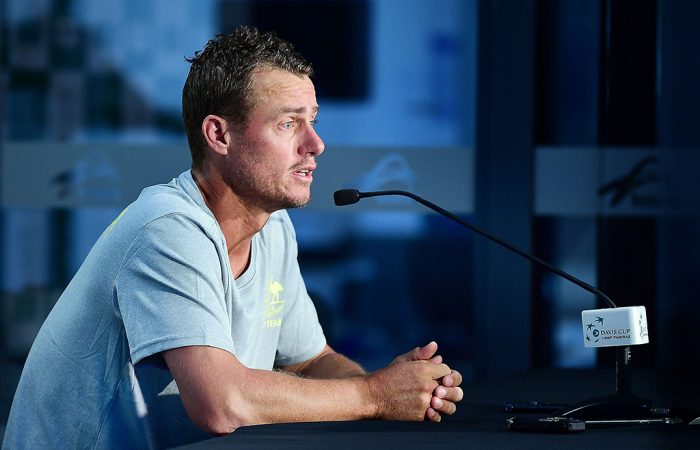 Lleyton Hewitt has tipped his hat to the professionalism and dedication of Australia’s Davis Cup squad as they prepare for the upcoming Davis Cup qualifying tie against Bosnia & Herzegovina.

De Minaur won the ATP title in Sydney and along with Popyrin advanced to the third round at Melbourne Park, while Peers went all the way to the doubles final on the last Sunday of the tournament. Millman and Thompson also won their first-round matches at Melbourne Park, with Millman stretching eventual quarterfinalist Roberto Bautista Agut to five sets.

Hewitt, speaking to the media in Adelaide on Tuesday afternoon, said the team was not content to stop there.

“Our boys, I couldn’t be happier with the guys who we’ve got here and the preparation and dedication and everything,” he said.

“It’s been a long summer for these guys. But after the Aussie Open was done, the first thing they said was ‘our summer’s not finished yet’. This is a massive priority for them, and I’m fortunate that they have that attitude.”

A win in Adelaide of the Bosnian team – who they have never before faced – will propel Australia into the 18-nation Davis Cup finals, to be staged in Madrid on 18-24 November.

Hewitt said they would not be underestimating the visitors, spearheaded by world No.52 Damir Dzumhur.

“Damir is a quality player, has very good wins, he’s been just outside 30 in the world for a while now,” Hewitt observed.

“Good all court player – looks to get forward, uses his slice backhand, drop shots, very quick across the baseline. We’re not taking anything for granted.

“And then (Mirza) Basic, their No.2 singles player, won a title last year as well. They’re two totally different players in game styles but we know it’s gonna be a tough match.”

Hewitt has plenty of selection options at his disposal.

And with every member of the team arriving at the tie in excellent form, it makes the selection process a challenging one, especially given the change in format.

All matches are best-of-three-set affairs.

“Wednesday night we’ll have a clear picture (of team selections) with the boys, and they’ll get told who’s gonna play, especially on Day 1,” Hewitt said.

“There’s small differences within it because it’s two days now and you have a doubles on the start on Saturday as the first match. So there’s a few different ideas go through you head, purely because it’s pretty tough for No.1s to come out and play doubles before singles – that’s something that doesn’t even happen in junior tennis.

“It’s a strange set up, but I’ve gotta try and come up with the best way of winning three out of the five matches.”

Adding to the sense of anticipation surrounding the tie is the fact that, for the first time since 2004, a Davis Cup tie will be staged in Adelaide.

Hewitt, a South Australian, won his first professional title at Memorial Drive back in 1998 as a 16-year-old.

“Really good (to be back in Adelaide). It’s been a long time. I was pushing to get a tie back here when I was captain … it’s good that we get the opportunity this time,” he said.

“Obviously this is a place that’s pretty close to my heart, Memorial Drive. And to bring these boys back here and lead the team, it’s a pretty exciting week for us.”