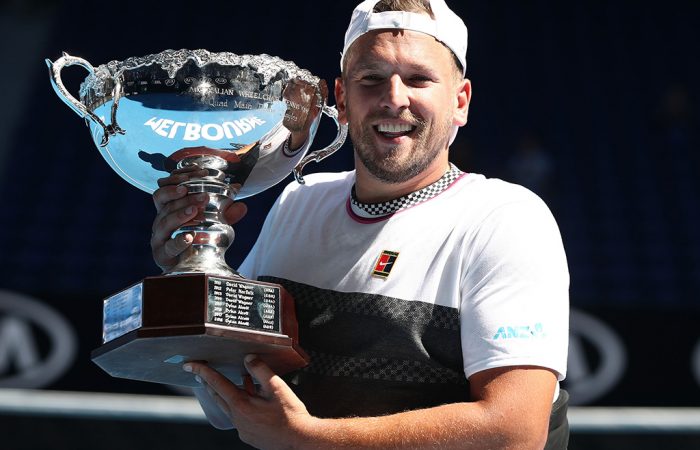 In a repeat of last year’s final and the most recent US Open decider, world No.1 Alcott defeated Wagner 6-4 7-6(2) at Rod Laver Arena on Saturday.

It is 28-year-old Alcott’s seventh Grand Slam title, a result which was broadcast on live television in a major coup for wheelchair tennis – and para-sports in general.

“That (fifth Australian Open) win meant the most to me … If you put yourself out there, it puts more pressure on you,” he admitted.

“I’ve really been everywhere the last two weeks. To broadcast it live to the world, never been done in a final, that’s huge for the movement of para-sports, everything that I believe in.

“I really meant what I said (in the trophy presentation), I got a bit emotional. I (once) lied in bed thinking, this sucks. Why don’t I see anybody like me? This used to eat me up.

“Whatever I’m good at, I want to make it. That’s what I used to tell myself. That’s the definition of making it, broadcasting that (final) to the world.”

The Australian has not lost a singles match since early September, and has built a 13-match winning streak taking in titles at the US Open, the NEC Wheelchair Tennis Masters, the Bendigo Open and now here at Melbourne Park.

Alcott beat Wagner in both the round-robin stage of this tournament as well as the recent Bendigo final, a shot of confidence he undoubtedly took onto Rod Laver Arena on Saturday afternoon.

Alcott appeared to be cruising to victory when he led 6-4 5-2, yet the 44-year-old Wagner lifted his game while Alcott tightened, and soon the gap had closed to 5-5.

Alcott rebounded in the ensuing tiebreak, and was ultimately too solid and powerful for the American.

He finished the match with 47 winner to just 19 unforced errors.

“To not choke it up and lose meant a lot,” he said.

“Everyone has been to the finals. That was the highest quality tennis. That was really good tennis. I’m really glad that was, to be able to broadcast that. It meant a lot.”