Kvitova too good for Barty in AO quarterfinals

Ash Barty could only describe Petra Kvitova as "too good" as the Czech swept to a 6-1 6-4 win in their highly-anticipated Australian Open quarterfinal. 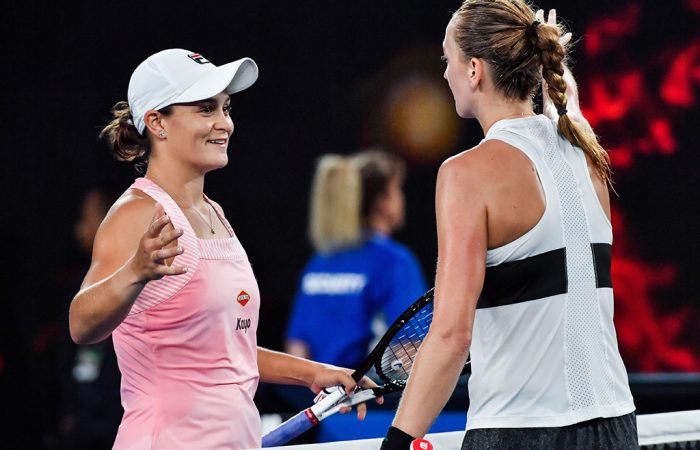 “She’s such a nice person and you should be very proud of her.

“Great match. I start very well, I served well. In the second set, she doesn’t give me anything for free and I really had to fight.””

The first Australian to make the women’s last eight since Jelena Dokic a decade ago, 22-year-old Barty was a passenger for most of the match, powerless to stop Kvitova’s fearsome assault.

“Petra took it away from me,” Barty said.

“I have no regrets. I would love to have certain points of the match back, but that’s not how it goes.

“Petra was outstanding. She really was.”

Unbeaten in 2019, Kvitova will play unseeded American Danielle Collins in the semifinals on Thursday after advancing to the last four of a major for the first time since falling victim to a home invader in the Czech Republic in December, 2016.

“I didn’t really imagine to be back on this great stadium and play with the best and it’s great,” the two-time Wimbledon champion said.

Barty wants it bad, too, and isn’t content with departing Melbourne Park with a fresh career-high ranking of No.14 in the world after a spectacular summer.

“Obviously once you get a taste of it, you’re always hungry for more,” she said, having only returned to tennis in 2016 following an 18-month hiatus.

“I’ve always been extremely driven and passionate, especially coming back this second time around, about how I’ve wanted to go about things, I think, more importantly.

“I’ve begun to understand better off the court how I can enjoy it more and enjoy the process, trust the process, get the results that we’re after.

Kvitova’s emotional win put the 28-year-old in the box seat to unseat Simona Halep from the top of the rankings next week.

Reigning US Open champion Naomi Osaka and sixth seed Elina Svitolina, who clash in the quarterfinals on Wednesday, and fellow Czech Karolina Pliskova, who faces Serena Williams in the last eight, are the only players who can stop Kvitova from climbing to world No.1 for the first time.