Birrell finds Kerber a class above

No.2 seed and 2016 Australian Open champion Angelique Kerber dropped just one game against young Aussie wildcard Kim Birrell at Rod Laver Arena in the third round. 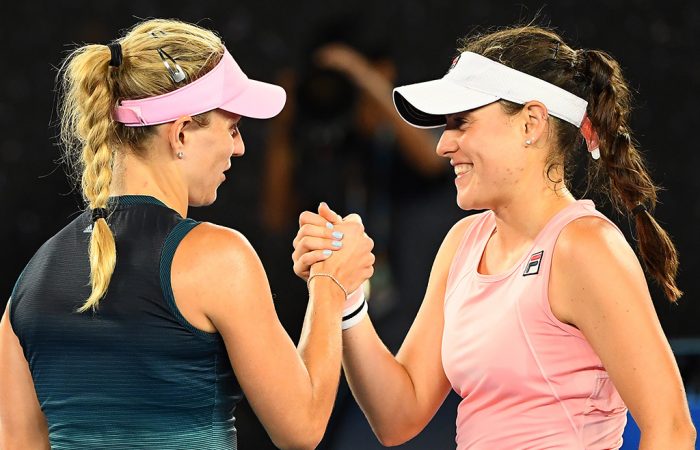 Kimberly Birrell’s breakthrough Australian Open campaign has come to a halt at the hands of second seed Angelique Kerber.

The 20-year-old Australian wildcard made a hasty third round exit with 2016 champion Kerber winning their Rod Laver Arena clash on Friday night 6-1 6-0 in just under one hour.

“Obviously I’m disappointed. Each match you lose is tough. You put everything into it when you walk out on the court,” Birrell said.

“But I’m just going to look at the positives from this whole week. The last few weeks have been such an incredible experience. I’ve learnt so much about myself on the court, off the court.”

Birrell was simply outclassed by Kerber, guilty of too many unforced errors with 30 to her opponent’s nine.

“She (Kerber) makes you win the point so many times. She just makes so many balls. She’s an incredible athlete,” Birrell said.

“I definitely learnt a lot from the match tonight. I think as soon as I walked off the court and I saw my team, I said, I need to get so much fitter. That was what really hit me first, is how well she retrieved.

“I mean, today was 6-1, 6-0, and I feel like I kind of played a three-setter almost. We had some really long rallies.

“I feel like I showed a little bit of some good tennis, but I just wasn’t able to sustain that level. That’s something you need to be able to do against these top women, incredible players.

“I just have a lot of work to do now. Still early in my career. Hopefully I have a long way to go.”

Despite the scoreline the reigning Wimbledon champion predicted a bright future for Birrell.

The world No.240 is already assured of a surge into the top 160 after her Open charge.

“She was a tough player, I knew I had to play some of my best tennis from the first to the last,” Kerber said.

“If she is playing like this and working hard she will be a top 100 player very soon.”

It was a double celebration for Kerber, with the match coming on her 31st birthday and she was serenaded by the crowd as she exited the court.