Barty breaks through at Australian Open

Ash Barty overpowered Maria Sakkari in a barrage of aces and winners to advance to the fourth round at Melbourne Park for the first time in her career. 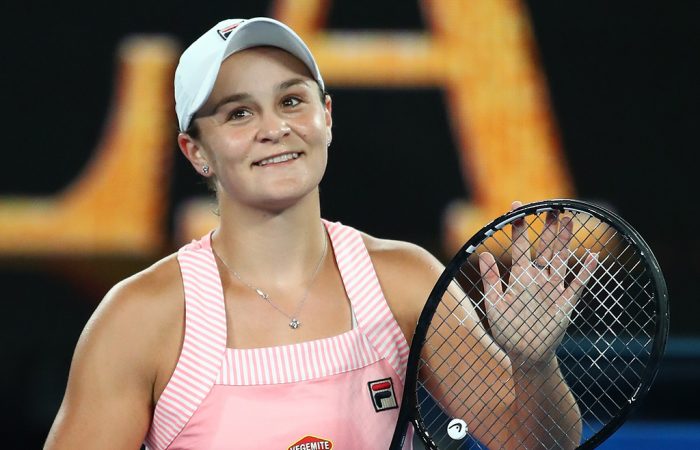 Ash Barty has survived an injury scare and a spirited challenge from Maria Sakkari to scrap her way into the Australian Open fourth round for the first time.

Australia’s big title hope needed a medical time-out after the first set to treat an apparent abdominal strain but returned to complete a hard-fought 7-5 6-1 third-round win over the tough Greek.

Barty thundered down 13 aces and dropped serve just once, but looked ginger at times with her movement, no doubt the result of a gruelling workload of eight matches in the past 12 days.

However, she loosened up considerably in the second set, unleashing a flurry of winners and cutting down her unforced errors to eventually dominate the match.

Ash Barty advances to the fourth round of the #AusOpen for the very first time in her career. #9WWOS pic.twitter.com/NEYIoGosMo

The 22-year-old broke Sakkari in the 12th game to snatch a tight first set, eventually prevailing after one hour and 22 minutes under a closed roof at Rod Laver Arena.

“The lively conditions suit both of us so it took time to get used to how dead and slow it is in here with the roof closed,” Barty said.

“There wasn’t going to be much in it the whole match and Maria is a great friend of mine and we have had exceptional matches in the past, so I’m extremely happy to come through in straight sets and find my way towards the end there.”

“This is amazing,” Barty said after matching her charge to the US Open fourth round last year.

“I haven’t played a full match with the roof closed before and it is absolutely phenomenal and to hear all the Aussies out here is just unbelievable.”

The Queenslander played down any injury concerns.

“All good. It held up well in the second set so no stress at all,” Barty said. “Ice bath, physio, coffee, cricket. I’m good.”

As well as a chance to reach the quarterfinals of a grand slam for the first time, Barty is projected to climb to a career-high ranking of No.13 in the world, or better, after the Open.