Kimberly Birrell's incredible summer has continued, with the Australian wildcard upsetting 29th seed Donna Vekic to reach the third round at Australian Open 2019. 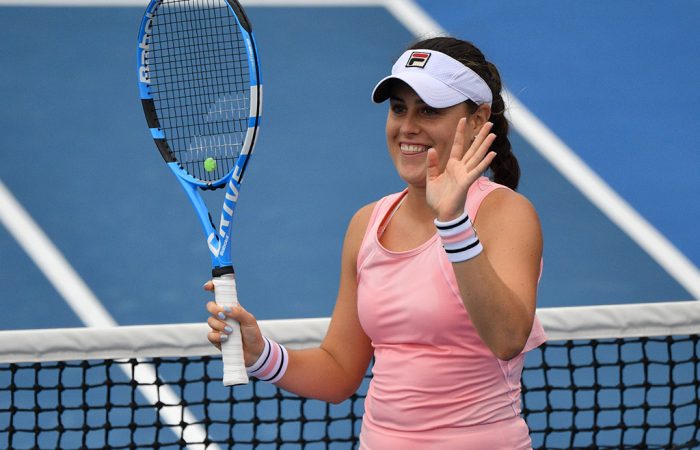 Kimberly Birrell recorded the biggest result of her burgeoning career on Wednesday at the Australian Open with a win over Donna Vekic.

Birrell, appearing in the second round of a Grand Slam event for the first time, showed incredible composure to close out a 6-4 4-6 6-1 win over the No.29 seed and seal a spot in the last 32.

There, she could meet Angelique Kerber, should the No.2 seed and reigning Wimbledon champion get past Brazil’s Beatriz Haddad Maia on Wednesday night at Rod Laver Arena.

“It’s so surreal. That was just such a blur,” she told Channel 9 excitedly on court.

“But all I know is I fought for every single point and I left it all out there. And I used the energy from the crowd – they were the best.

“I’m just so excited that I get to play again. It’s crazy.”

Birrell joins countrywoman Ash Barty in the third round after the 15th seed dismantled Wang Yafan earlier in the day at Rod Laver Arena.

The Queenslander has now won four of her six matches to begin 2019; she also reached the second round of the Brisbane International and advanced to the final round of qualifying in Sydney.

Add the four matches she won at the Australian Open Play-off in December to earn a main-draw wildcard for this tournament, and her record stands at eight wins from her past 10 matches.

Birrell proved more than up to the task of facing Vekic, who entered the contest with a recent semifinal appearance in Brisbane under her belt.

The Croatian, currently at a career-high ranking, has weaponry including a powerful first serve and flat, penetrating shots off the ground.

Yet it was Birrell who controlled many of the rallies in the opening set, keeping her unforced error count low yet playing aggressively to get Vekic constantly on the move and out of position.

A lapse in the second set – and an improvement in Vekic’s level – saw the 29th seed quickly move ahead 5-1 in the second, yet impressively, Birrell didn’t go away, tightening scores up to 5-4 against her increasingly rattled opponent.

Vekic served out the set on her second attempt but Birrell wrested control of the third set, building a 5-0 lead.

Although Vekic held and forced Birrell to serve it out, there were few visible signs of nerves from the young Aussie, who slotted an ace up the T for 30-15 and smacked a backhand winner down the line to reach match point.

She converted when Vekic poked a return into the net.

Birrell laughed when admitting there were plenty of nerves in that final game.

“There were so many things going through my head. I just had to bring myself back to the present, and focus on getting my first serve in, and I was able to do that,” she said.

“I haven’t really looked too far ahead in the draw … if I do end up playing (Kerber), I hope that I do, because that would just be such an incredible experience. We’ll see what happens.

“Anything can happen – you just have to dream big and work really hard.”