Ash Barty came within a few points of the title, yet two-time Wimbledon champion Petra Kvitova digs in during a tense final set to claim her second Sydney crown. 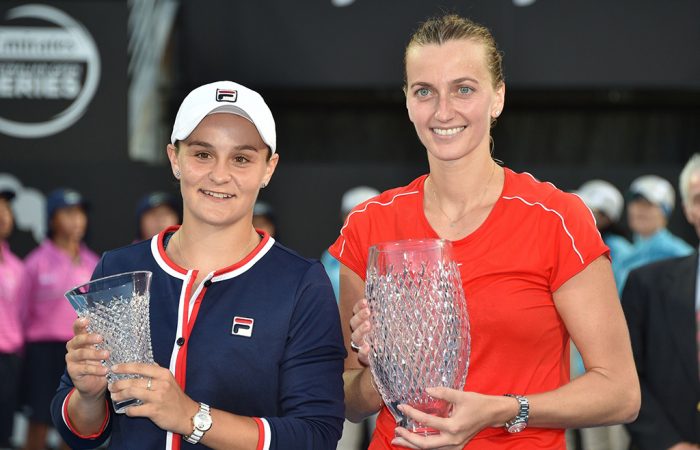 Petra Kvitova has ended Ash Barty’s hopes of a maiden WTA title on home soil, coming back to beat the Australian 1-6 7-5 7-6(3) in an epic Sydney International final.

After Barty cruised to an opening set win in 29 minutes, world No.8 Kvitova served to stay in the match in the second and edged home in the third-set tiebreaker to claim her second Sydney crown after triumphing in 2015.

Barty was also beaten in the decider in Sydney last year by Angelique Kerber, but enjoyed a fantastic tournament in 2019, beating world No.1 Simona Halep and top-10 player Kiki Bertens en route to the final.

"I left everything out here and it wasn't quite enough."

Head up high, @ashbar96 – what a week @SydneyTennis for you! pic.twitter.com/xogZXtc6Ee

Kvitova, who completed her rain-delayed semifinal at almost 1am on the morning of the final, looked flat from the outset against a fleet-footed Barty, who opened a 4-0 lead and took the set three games later.

It was at that precise moment the Czech came alive; benefitting from the slightly cooler, shadier conditions as the final extended into the early evening, she began landing more of her venomous groundstrokes from the back of the court.

She broke for a 6-5 lead and won the next game to send the match to a decider.

Kvitova has now won her last 8 consecutive finals. She is 26-7 in career finals. #WTA

Barty was simply fighting to stay alive in the face of Kvitova’s now irresistible momentum, yet snared a surprising break in the second game from 40-15 down.

The Australian moved ahead 3-0, but Kvitova broke back in the fifth game – emitting her trademark celebratory scream – and quickly levelled at 3-3.

In a compelling ninth game, Barty saved four break points but couldn’t fend off a fifth. But with the break in hand, Kvitova couldn’t serve out the match.

She broke again in the 11th game but once more came unstuck, beginning to struggle physically and dishing up back-to-back double faults to send the final set to a tiebreak.

Appearing to cramp during the tiebreak, Kvitova simply had to go for her shots to keep points shorts.

That tactic, coupled with some inopportune errors from Barty, proved enough.

The Czech fired a running cross-court forehand winner on match point that caught Barty moving the wrong way, a shot delivering her a sixth WTA title in the past 12 months.

“Of course it’s tough to take. It’s hard to put in words at the moment, but it’s been a hell of a week. I mean, I couldn’t have left anything more out on the court,” Barty said.

“Petra came up with the goods when she needed it today. Sometimes when you play Petra, you have those matches where a lot of the time it’s out of my control.

“She had the courage and she was brave to take the game on, and she deserved to win today.”

Left it all out there but it wasn’t enough tonight. Too good @Petra_Kvitova! It’s always a pleasure sharing the court with you.
Thank you Sydney!! Onto Melbourne we go 🤗 pic.twitter.com/cpDqyPUSY6

Kvitova apologised to Barty and the Sydney crowd for spoiling the Australian’s Sydney party.

“I really like Ash. She’s a great competitor. She’s a very nice person off the court, as well,” Kvitova said later.

“I feel sorry for her that she couldn’t make it today, unfortunately … she really put everything out there today, and she really played a great game. She served very well, as well. She had a great run to the final. Unfortunately she was in the final last year, as well.

“It’s not the best for her, but she’s very talented. Even like she stop with the tennis and she came back, and she’s playing unbelievable. It’s only great things to her.”