Thanasi Kokkinakis has qualified for a Grand Slam main draw for the first time in his career, and later on Friday, Astra Sharma did the same. 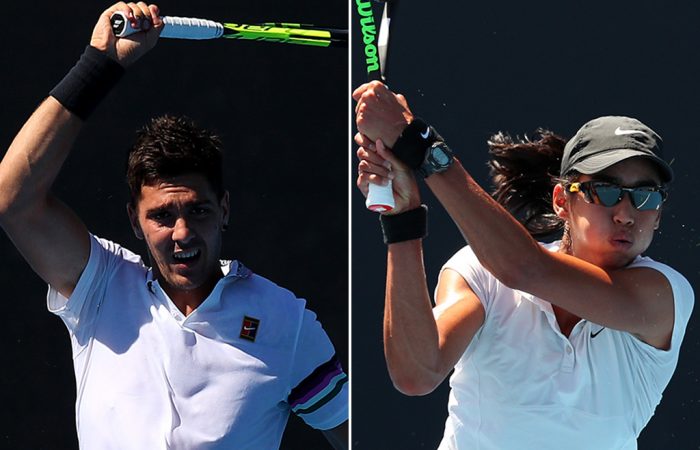 Thanasi Kokkinakis has advanced to the main draw of the Australian Open, defeating Canada’s Peter Polansky in the final round of qualifying at Melbourne Park.

Kokkinakis prevailed 6-4 6-4 to win his third match of the week in straight sets.

It is the first time Sharma has ever played at a Grand Slam event.

WHAT AN AMAZING STORY!

Aussie Astra Sharma is 23 years old. She's never played in a Grand Slam before. And she just defeated Russia's Irina Khromacheva in three sets, 12-10 in the third set tiebreak to book her spot in the Australian Open.@astrasharma #AusOpen #9WWOS #Tennis pic.twitter.com/BSXvaBnZ7u

“To come back and get that (second set) was incredible. I mean once I got that I was really confident. I felt really good in the third because I wasn’t tired or anything so I felt like I could get a good start,” Sharma reflected.

“It was an electric atmosphere. There was a lot on the line. Just to have that crowd support was really just pushing me through a heap.

“To be honest, (I have) no expectations now. Just really happy to get that win.”

The wins for Kokkinakis and Sharma swell local representation in the main draws of the season-opening major to 22, with 12 in the men’s singles event and 10 in the women’s singles.

Queenslander Nakitha Bains’ run came to an end in the final round of qualifying when she fell 6-1 7-5 to Jessika Ponchet of France.

Sharma was forced to saved three match points in the second set tiebreak – two of which she saved with winners.

Against an opponent – once ranked as high as No.89 – who increasingly struggled physically, Sharma held her nerve as the match progressed to a final-set tiebreak.

Two match points came and went, before she converted on her third when Khromacheva found the net with a backhand.

In the first match of the day on Show Court 3, Kokkinakis produced an impressive display – highlighted by 18 aces among 33 winners while committing just 17 unforced errors – to complete victory in exactly 90 minutes.

“I am just really happy to earn my way into the main draw,” he said.

“It’s never easy to qualify for any event and I am proud of the way I’ve competed. It’s been great preparation for the main draw.

“There’s nothing better than playing in your home Grand Slam, it’s what we work hard all year for.”

Kokkinakis will face Taro Daniel in the first round of the main draw, while Sharma has drawn fellow Australian Prisicilla Hon as her first-round opponent.