For the second straight year, Ash Barty is into the Sydney International semifinals – this time courtesy of a 6-3 6-3 win over world No.12 Elise Mertens. 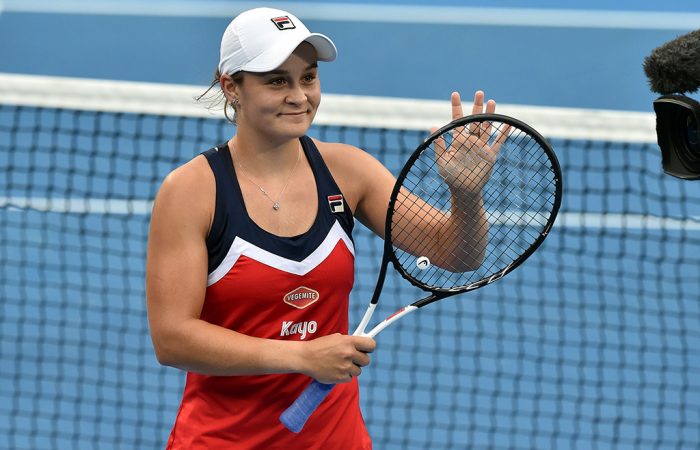 Ash Barty has delivered a “solid” performance to return to the Sydney International semifinals for the second straight year.

Just 24 hours on from scoring the biggest win of her career over world No.1 Simona Halep, Barty backed that up with a 6-3 6-3 win over 12th-ranked Belgian Elise Mertens.

The 2018 Sydney finalist next faces seventh seed Kiki Bertens, who brushed Yulia Putintseva aside 6-2 6-2 to reach in the last four.

“It was nice and solid today. I was pretty happy with the way I was able to come out here and play,” Barty said on court.

“It was important (to get) those first couple of points to set the tone for the game. A little bit of a slow start, but I was able to get the ball rolling mid to late in that first set.

“There are a lot of thought going through my head – always thinking about my game, about how I can improve and how I can get better.

“For us, it’s mostly been about how I try and play my game and not get too sucked into playing the way they (opponents) want me to play. It’s important for me to serve well and look for forehands and try and be dominant from that first shot.”

Barty has won five of her six singles matches to open 2019; two at the Hopman Cup, and all three of her Sydney International matches in straight sets.

She navigated a couple of wobbles throughout the match, including in the third game of the opening set, where she dropped serve only to break straight back.

Leading by a break in the second set, Barty dropped serve in the sixth game, but responded strongly with an immediate break back in the seventh game and another break in the ninth to wrap up victory in 76 minutes.

“I feel like there haven’t been too many times where I have felt uncomfortable on the court,” Barty said.

“(I’m) obviously extremely determined. I had a taste of what it was like last year (reaching the final) and I’m very keen to keep going as best that I can.

“I know I’m playing good tennis. I’m well-prepared. Now it’s about going out there and executing and trying to finish this week off strongly, before worrying about next week.”