Sydney and Brisbane will host the new ATP Cup event in 2020 with a third capital city to be confirmed soon. 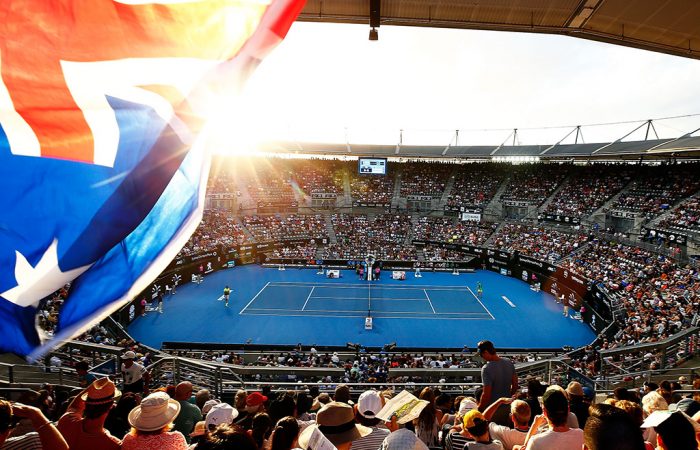 Sydney and Brisbane will host the new ATP Cup event in 2020 with a third capital city to be confirmed soon.

In an announcement on Sydney Harbour this afternoon, Tennis Australia CEO Craig Tiley also explained that Sydney would host the finals of the new event in the soon-to-be refurbished Ken Rosewall Arena.

“With more than 100 players from 24 nations vying for 22 million in prize money and 750 ATP ranking points, the ATP Cup will help us launch the global tennis season every January in Australia,” he told an audience that included ATP World Tour Executive Chairman & President Chris Kermode and a group of top players from this year’s Sydney International and FAST4 events.

“The ATP Cup fits perfectly with our strategy to innovate and look towards the future. We know from our extensive discussions with the players that the ATP Cup will provide a great way for them to open their season – bringing together the world’s best for a major team event that compliments existing scheduling, provides highly-coveted ATP ranking points and clearly links to the Australian Open,” Mr Kermode said.

“The first week of the season is when the players want to play and that’s why the tournament has their strong support. By staging the event with Tennis Australia, which is renowned for its experience as an outstanding event promoter, we know that the tournament will be a great success from year one,” Mr Kermode continued.

Mr Tiley said Tennis Australia had a vision for the future of the Australian tennis summer which potentially includes a new women’s event.

Sydney will have a new event and $50.5m worth of upgrades to Sydney Olympic Park Tennis Centre which includes a new roof on Ken Rosewall Arena and Court 1.

NSW Minister for Tourism and Major Events Adam Marshall said he was delighted Sydney had secured the finals matches until 2022.

“This is another coup for our State, not only for athletes and sporting fans but the wider NSW community who are set to win from the estimated $36.5 million injection into our local economy,” Mr Marshall said

Brisbane will expand its international tennis offering to include the ATP Cup and its existing WTA event.

Premier Annastacia Palaszczuk said securing the rights to the ATP Cup would ensure the world’s best tennis players continue to come to Queensland in January.

“Tennis is much loved by Queenslanders right across the state and is a strong tourism driver,” the Premier said.

“We are also having discussions with the WTA about exciting new concepts for women’s tennis in Australia,” Mr Tiley confirmed.

Tennis Australia’s vision for 2020 and beyond for the Australian summer of tennis includes:

“We want to build on the great tennis we have in Australia. We have seen fans both here and overseas embrace the offerings. Our events have been brilliantly supported by players, broadcasters, commercial partners and governments alike,” Mr Tiley said.

“A major step toward achieving that vision is to deliver world-class tennis to cities across Australia which is what the ATP Cup will do. It is the next piece in a vision that will ultimately grow tennis and provide inspiration for future generations,” he continued.