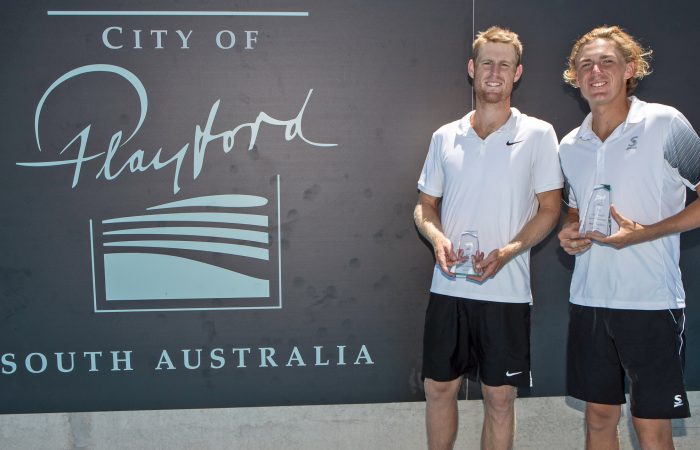 “We played some good tennis all week and it’s nice to do it at home as well,” Saville, 24, said.

The third seeds outplayed their opponents, Uruguay’s Ariel Behar and Enrique Lopez Perez of Spain, defeating the No.4 seeds 6-4 7-5. Saville and Purcell also ousted the top seeds, Belgians Sander Gille and Joran Vliegen, in the semifinals.

“We felt like we were the more aggressive pair out there today. In the end, it really paid dividends, we had a lot of chances on their serve and continued to pressure them throughout the whole match. Max really took it upon himself to bring it home for us,” Saville said.

The win comes on the back of a November ATP Challenger title in India. “We’re playing some pretty good doubles together now and it’s definitely a big confidence boost,” Saville added. “It’s a good lead into the Australian Open.”

Saville’s success continues an impressive vein of form for him, after his run to the final of the Australian Open Wildcard Play-Off in early December.

“I had a lot of good victories there. Obviously, it hurts losing in any final but I put my best foot forward and I earned myself a qualifying wildcard which was not on the radar, so that was big for me personally,” he said.

“I feel like I’m starting to turn a corner on the singles court as well and I’m looking forward to giving it a crack in a couple of days.”

Purcell, 20, will also compete in the Australian Open qualifying event.

“The last five months have been so tough for me, injuries and some doubts, so to start the year with a title is amazing,” said the 34-year-old former world No.63. “The key today was my experience. We play such different types of tennis, me from the baseline and running and him with power.”

“I played well on the big points so that made it difficult for him, so I’m happy to finish like this.”

The 11-time ATP Challenger titlist now moves his focus to the Australian Open. “I feel really happy, I’m coming with a lot of confidence and I will try to play well at my favourite tournament of the year,” he said.