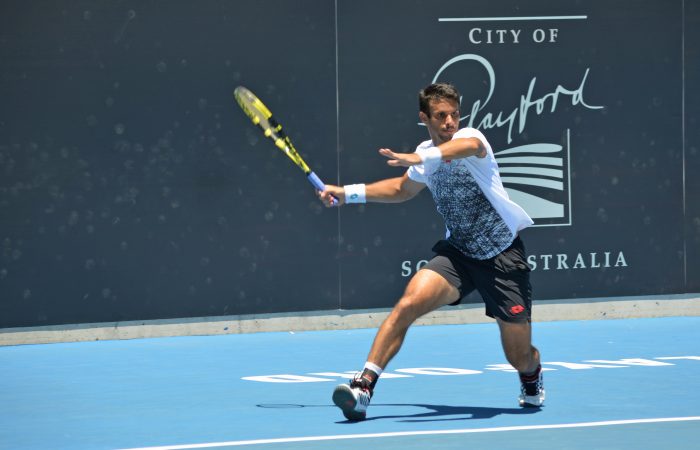 Li had looked solid in advancing to the semifinals, on the back of winning the Australian Open Asia-Pacific Wildcard Play-Off, which took place in Zhuhai in early December – in doing so becoming just the third man from mainland China to play in a Grand Slam singles main draw.

However, Dutra Silva had the answers when it counted on Saturday, the former world No.63 and tenth seed recovering from a one-set deficit to post a 6-7(5) 6-4 6-3 victory. He will now face German Mats Moraing (No.8) for an opportunity to claim his eleventh ATP Challenger title.

After ousting top seed Lorenzo Sonego of Italy in the quarterfinals, the 26-year-old German secured his finals berth with an impressive 6-4 6-2 win over Constant Lestienne of France. The pair were evenly matched, similarly aged, and side-by-side in world rankings at No.150 and No.151 respectively.

Lestienne was earlier responsible for ousting Aleks Vukic, the only Australian to make it beyond the first round in Playford. However, he was unable to compete with the power of the 198cm German in their semifinal clash.

“It’s been a very good week so far and a good start for the year,” Moraing said. “I hope I can keep it going. I had a good off-season, I was working hard and now it’s paying off.”

“I played (Lestienne) last year and lost so I was very happy that I could get the win today,” he added. “I served really well and stayed aggressive the whole time. He was always under pressure.”

Moraing will be looking to add a second ATP Challenger title to his collection after maiden success in Koblenz, Germany, twelve months ago.

“It seems I like to play in January so we will see what comes up tomorrow,” he said.

The German has never before met Dutra Silva but is keenly aware of the Brazilian’s experience and persistence on court.

“He’s a great player and he fights for everything. He gets a lot of balls back so it’s going to be a very tough match,” he said.

Meanwhile, Australian hopes were kept alive when No.3 seeds Luke Saville and Max Purcell ousted top-seeded Belgians Sander Gille and Joran Vliegen 3-6 7-6(4) [10-5] to reach the doubles final. They will now meet Ariel Behar of Uruguay and Spain’s Enrique Lopez Perez (No.4) in the title match on Sunday.

The women’s final will be contested between Kazakhstan’s Elena Rybakina (No.6) and Russian Anna Kalinskaya (No.3) after each completed straight set victories over their respective opponents, British fourth seed Katie Swan and unseeded Frenchwoman Chloe Paquet.