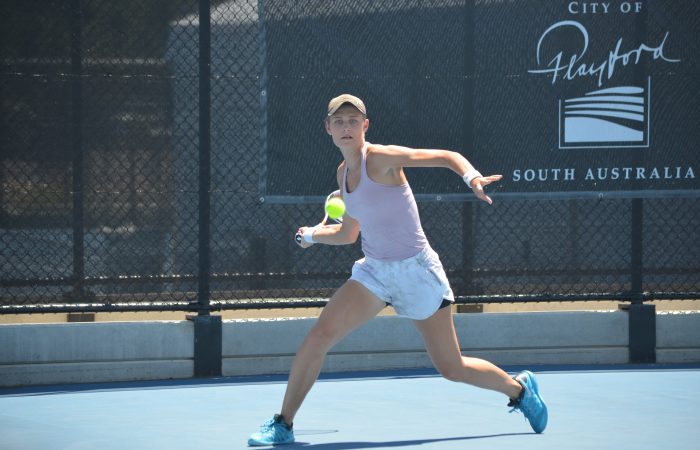 Kaylah Mcphee has made her way into the City of Playford Tennis International quarterfinals after surviving a match point to overcome fellow Australian Belinda Woolcock on Thursday.

After dropping the first set in a hurry and finding herself a service break down in the second, the Queensland wildcard managed to lift her game and eventually seal the victory 2-6 7-5 6-4.

“I’m really happy to have gotten through,” said Mcphee, 20. “I was down and out in that one and it’s a big relief to have fought back and won, so I’m definitely feeling pretty good.”

“I just wanted to keep fighting my hardest and hopefully turn it around. If I couldn’t, at least fight until the very end.”

Mcphee was full of praise for her Victorian opponent, Woolcock, who – playing in her first professional event since injuring her knee almost a year ago – came from qualifying to reach the second round after defeating Italian No.7 seed Martina Trevisan.

“It’s hard to believe she’s been out that long,” Mcphee said. “She’s playing well, really attacking and her net play is incredible.”

Mcphee will now attempt to match her best performance at an ITF World Tennis Tour event when she takes on Brit Katie Swan for a semifinal berth.

“I’ve watched a bit of her this week and she’s definitely a good player,” Mcphee said of her upcoming opponent. “We haven’t played before and it will be good if I can pick up something on her, but more importantly I need to focus on my own game.”

Swan, the No.4 seed, was clinical in defeating France’s Irina Ramialison 6-1 6-4.

Earlier on Thursday, wildcard Isabelle Wallace lost a tight three-set affair to another Frenchwoman, Chloe Pacquet, going down 4-6 6-4 6-3 and leaving Mcphee as the only Australian remaining in the draw.