Vukic safely through in Playford 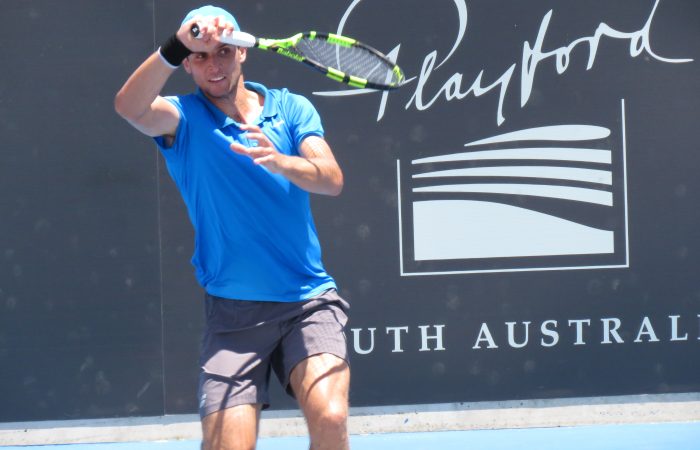 Aleks Vukic is the sole Australian remaining in the City of Playford Tennis International after moving into the second round with a rapid fire 6-4 6-0 win over Chun Hsin Tseng of Taipei.

The 22-year-old from Sydney said it was good to get the new year started off right.

“I had a long off-season and then the (Australian Open) Wildcard Play-Off,” he said. “I lost to Alex Bolt there but I thought I played pretty well. I’ve been working hard and I was ready today.”

“That first set was pretty up and down,’ he added. “But once I got that early break in the second, he went away a little. I just had to hang in there as long as I could until that happened.”

2019 marks the first calendar year out of college for Vukic, who spent the last four years at the University of Illinois, which boasts such names as current world No.6 Kevin Anderson.

“I’ve talked to him a bit and he’s helped me a little with the transition,” Vukic said of the big-serving South African. “I feel a lot better mentally and physically with my game as well. I’m ready to go to the next level.”

Having lost to Queenslander Maverick Banes in the second round last year – after suffering cramps ahead a break in the deciding set – Vukic is determined to move further ahead this week.

“I really like the courts here, they suit me well, so let’s see how I go in the next round.”

Vukic, the world No.348, faces ninth-seeded Frenchman Constant Lestienne. “I’m not too familiar with him but I’ll focus on that tonight,” he said.

It hasn’t been a great week for the Australian men in Playford thus far, with three wildcards edged out in the deciding sets of their first round encounters on Monday. In-form local Luke Saville (a recent Australian Open Wildcard Play-Off finalist) was defeated by veteran German Tobias Kamke while Akira Santillan and Max Purcell went down to Egypt’s Mohamed Safwat and Sadio Doumbia of France respectively.

Second seed Casper Ruud of Norway and South African Lloyd Harris (No.3) both made safe passage to the third round on Tuesday, while top seed Lorenzo Sonego of Italy opens his campaign on Wednesday after receiving an opening round bye.