In her first full season as a pro, Ellen Perez rose inside the top 200 after reaching five Pro Tour finals. She arrives at Melbourne Park this week as the second seed in the Australian Open Play-off. 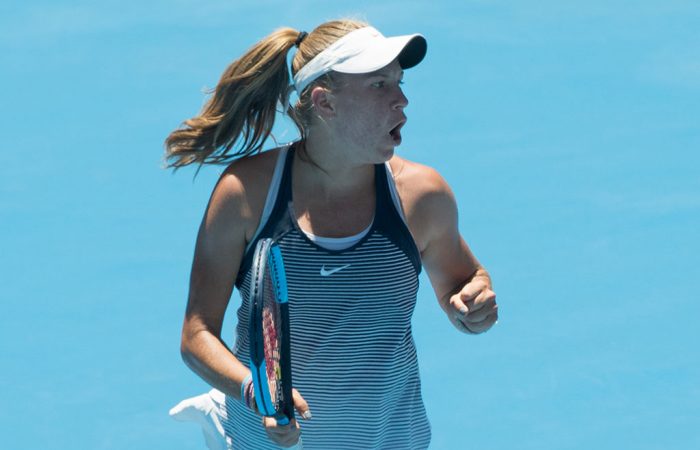 Ellen Perez began 2018 ranked 343rd and in the next 10 months practically halved her ranking, ending the season ranked No.181.

The left-hander from Wollongong graduated from the University of Georgia in April 2017, making this year her first complete season on the professional circuit.

She spoke with tennis.com.au ahead of her campaign at the Australian Open Play-off, where she is the No.2 seed.

How was your experience of your first full season on tour?

“It’s been great. It’s been a bit of a learning curve, coming from college into pros, obviously it’s a different level of tennis. But I think college prepared me well for leaning how to compete and work hard for things. The first few tournaments were probably a little rough but I think as we’ve gone, and after having a full year, I’ve kind of learned some things along the way and now I’m better prepared and ready to give it a good crack.”

Why was it rough? What were some of the challenges?

“I think it just leaving college, leaving a lot of close friends and relationships there. And just being thrown into a country on your own. And just the level is a bit stronger at times. And I did start playing some $100,000s and WTA tournaments and just found I was being thrown in the deep end a little bit. But it was exactly what I needed and I feel like from that it’s now paying off a little bit.”

So once you adjusted and got into the swing of life on tour, what were some of the things you found? Form wise, you had a brilliant year.

“Definitely these last few tournaments, the back end of the year, I picked it up. At the start of the year I had a bit of a rough patch; I went on a seven-match losing streak. I was doing the right things – I just couldn’t seem to get the win in the end. We always say just trust the process and things will kind of take a turn if you just work hard, those little one-percenters will pay off. It did take that turn, and I ended the season well.”

You’re not shy in sharing your opinions on social media. What’s behind that, and do you have aspirations maybe for something like the WTA Player Council or similar?

“I’ve always been someone that likes to give their opinion … I definitely want the game of tennis to evolve and to be in a positive position with players. Sometimes there are people in charge who don’t really know what it’s like to be a player. There are certain times when I know I should hold back – you don’t want to get involved in too many things on social media (laughter). I’ve never sat here and thought, oh I want to get on that committee, but if someone was to approach me I’d be someone who was very open to it and I love being able to speak and talk to people and give my opinions and whatever. (Being on tour now) you start to learn some of things; you’re like, why do that do it that way? I don’t think I’m the most informative in that area, I think there’s still a lot for me to learn and realise still.

Anyone who says they aren't happy doesn't understand the sport and welfare of the players. Would love to see you try to play 4+ hours then have to back it up the following day. A tie-break at 12-12 is very justifiable! 👏 @Wimbledon https://t.co/rBnUf4V4xs

“We just did a WTA Camp with Tennis Australia and they had us sit down and kind of go over how we think they should give wildcards and our opinions on tournaments and schedules. And being able to put our input into that and seeing it evolving over the last year or two, because they’re taking our feedback, it’s a really cool process. So if I could try and get involved in different things like that, I’d really like it.”

You made five finals on the Australian Pro Tour this year. I saw your tweet about ‘what do I have to do to win one?’ You were close. Do you view it positively that you reached five finals? Or do you think more that you wish you’d won one?

“I definitely view it positively. I was making a bit of a joke out of that one (tweet) but for sure, if someone had told me you’re gonna make four finals in these last tournaments I would take that for sure. It would have been nice to maybe win one and then sacrifice not doing as well in another, but I think doing four finals (in a row) was definitely for me a big highlight of my year and I’m very happy with it.”

If anyone has any tips on how to win a final please DM me 😂 https://t.co/psb91SmyNd

Those performances put you inside the top 200. What does that mean schedule-wise for you in 2019?

“I think it will definitely mean that I can commit to a WTA schedule, be able to play doubles more so because my doubles ranking is up there as well. Maybe it might allow me to play a couple of really big tournaments in qualifying, whereas in the past I didn’t even think about it. We’ll see, but I think it’s gonna be a similar schedule – just with more confidence (smiling).”

“This year I definitely wanted to crack top 200. I mean, I hate putting a number on it, but I just wanna keep myself inside (that bracket) playing all the Grand Slams. I would love to qualify for a Grand Slam, that would be cool. We’ll see where we go with Australian Open. But later in the year, whether it’s the (French or US Open) play-offs and getting another wildcard or qualifying myself, that would be a huge step, just to know I’ve got the level to be able to play those girls. And just staying healthy, playing a full schedule and just getting a lot of matches against girls in that 50-200 bracket.”