Two in a row for Jordan Thompson 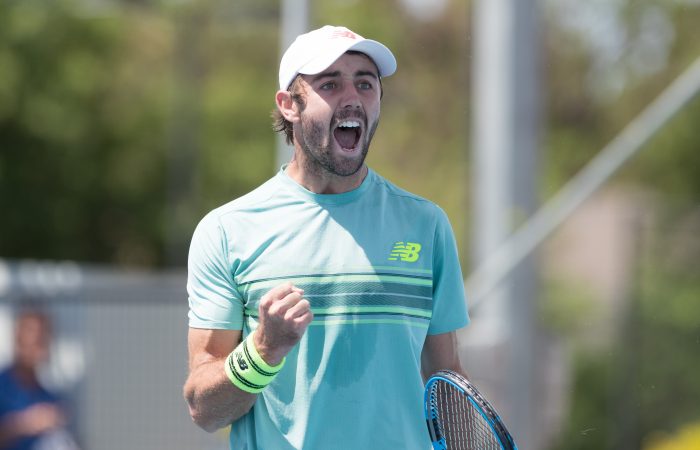 “I’m pretty happy with myself,” said Thompson, who won his second consecutive ATP Challenger title after victory in Traralgon. He was also a finalist in Calgary the week prior to that.

Thompson has now played eight Challenger finals this year; Canberra marks his third title. The win on Sunday also sees him become just the second player to record 52 wins on the ATP Challenger Tour in a single season.

“I raced through the first set, I was serving really well, playing smart and not missing any balls,” Thompson said of the 6-1 5-7 6-4 victory. “I expected him to pick up his game and in the end he made a real battle out of it.”

Thompson, the third seed, recovered from an early break down in the final set against the unseeded Spaniard to lead 5-4 – before serving it out against a difficult wind. “I got a few free points there which was pretty lucky, it was good to close it out,” he said.

“I have a little more experience in these situations, but he’s won a Challenger before and been to finals, so he’s not stranger to it either.”

The win will move Thompson, 24, inside the world’s top 75 and within reach of his career-high ranking of No.63.

“It’s the highest I’ve been all year no doubt,” he said. “In my books, I’ve had a little bit of a rough year, I only won one match on the ATP Tour so I had to go back to Challengers. I just had to put my head down and work hard.

“I’ve been going for probably two months straight now, so I’ll have a couple of weeks off and then come back and do a good pre-season.”

Earlier on Saturday, Jeremy Beale and Thomas Fancutt were unable to set up a clean sweep for the Aussies, going down to Brit Evan Hoyt and Tung-Lin Wu of Taipei in the doubles final.