Ash Barty's impressive week in Zhuhai has continued, with the Aussie ousting defending champion Julia Goerges to reach the final of the WTA Elite Trophy. 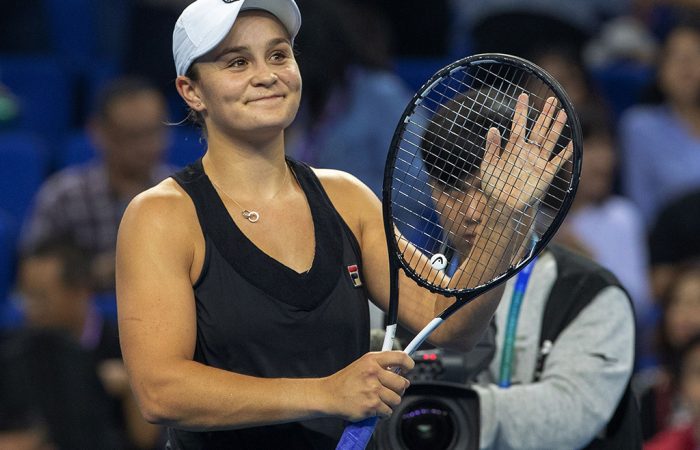 Ash Barty originally figured she’d have left China already; instead Australia’s leading female tennis player is through to the final of the WTA Elite Trophy.

Barty feared her tournament was over after her round-robin stage debut in Zhuhai ended with defeat to Aryna Sabalenka – but a key result fell her way before she overwhelmed defending champion Julia Goerges in Saturday’s first semifinal.

While the 22-year-old world No.19 had to rely on Caroline Garcia beating Sabalenka to emerge from Orchid Group with a positive games differential, defeating Gorges was solely down to her.

The German looked on course to extend her title defence after securing a late break to take the opening set.

Barty was also broken early in the second but the momentum then shifted and the Australian eventually cruised to a 4-6 6-3 6-2 victory.

Once she broke the world No.14 twice to send the contest into a decider – and then made the ideal start to the third set when breaking Goerges to love – there was no way back for the favourite.

“It’s certainly nice to get better as the match goes on, but also saying that you’d like to be pretty good right from the get-go,” Barty said.

“There’s always room to improve, adjust, try and find a way to get yourself into the match.”

Goerges had already flirted with elimination in Rose Group before she snuck home against Belgian Elise Mertens, but Barty proved a more ruthless opponent despite recording six double faults.

“It's certainly nice to get better as the match goes on, but also saying that you'd like to be pretty good right from the get-go. There's always room to improve, adjust, try and find a way to get yourself into the match.” said @ashbar96 #WTAEliteTrophy #ShineinZhuhai #Zhuhai pic.twitter.com/AHxVGjl2x0

Although an occasionally wonky serve proved immaterial, she will want to remedy that aspect of her game before the final against local favourite Wang Qiang, who thrashed Garbine Muguruza 6-2 6-0.

“It’s exciting to be in the last match of the year and give myself an opportunity at the title before heading home and putting my feet up and chilling with the puppies a little bit,” Barty said.

“I have only played Q (Wang) on a clay court. It’s kind of a fresh slate.

“Nothing really changes for me. I go out and try to play the same way.”

Barty is seeking her third career WTA Tour title, having previously triumphed in Kuala Lumpur in February 2017 and at Nottingham in June this year.

This would be the biggest title of her young career.

Originally Madison Keys was designated to play Muguruza but she withdrew due to knee injury.

Wang beat Keys in the final match of round robin play in the Azalea Group on Friday but not by a wide enough margin to prevent the American progressing – and then injury intervened.