Defending champion Olivia Rogowska and maiden finalist Zoe Hives will clash for the first time to decide who takes home the Canberra crown. 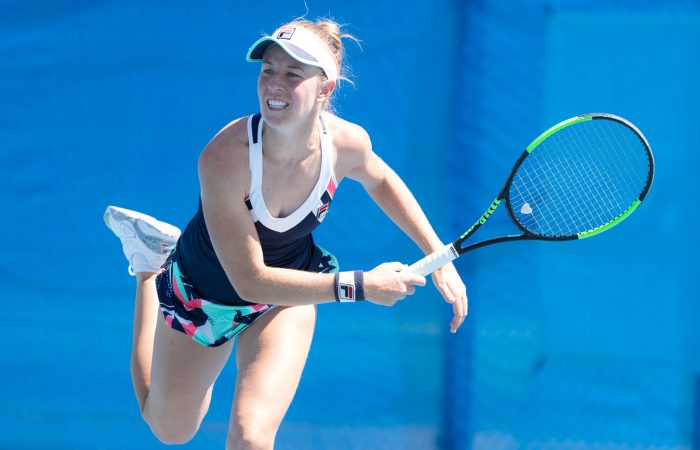 Victorians Olivia Rogowska and Zoe Hives have set up an all-Aussie final at the Apis Canberra International after each posted a victory on Saturday.

Rogowska, 27, is yet to drop a set en route to the final and continued to display her solid form in defeating Astra Sharma 6-1 6-4.

“I knew what to expect,” the fourth seed said of her opponent. “I had a few simple goals and it worked well.”

“She’s a very tough competitor,” Rogowska added. “She doesn’t give you many free points and she plays a bit differently, gets a ton of balls back with a lot of shape.

“I’ve played her before and I went down so I was ready. I wanted to make it as tough as I could for her and that’s what I did really well.”

After a stellar campaign on the Australian Pro Tour last year, the world No.184 is pleased to be back in the Canberra final with an opportunity to defend her title.

“I lived here for a couple of years at the AIS and I always have good feelings coming back, and obviously I’m trying to defend the title tomorrow,” she said. “But I’m not thinking too much about that, my goal was just to get as many matches as possible and I’ve done that now, so that’s good.”

“She came out really well, I felt a bit rushed and couldn’t quite get my timing going but as the match went I started feeling better and better and by the end I thought I was playing pretty well,” Hives, 22, said.

After being pushed to three sets for the third time this week, Hives is pleased with the resilience she has shown this week. “I’ve mentally fought through a few matches already so I’m really happy with that effort,” she said.

While having never met Rogowska at a professional level, the world No.269 is keeping a level head. “She’s been in these situations plenty of times, where it’s my first (ITF Pro Circuit) $60K final, but I have played in a few other finals so it’s not too strange.”

“It’ll be a tough match but I’ve got through my others this week, so I’ll give it my best and see how I go.”