Barty sneaks into semifinals in Zhuhai

In the tightest of circumstances, Ash Barty has secured her passage into the WTA Elite Trophy semifinals after Caroline Garcia beat Aryna Sabalenka in straight sets. 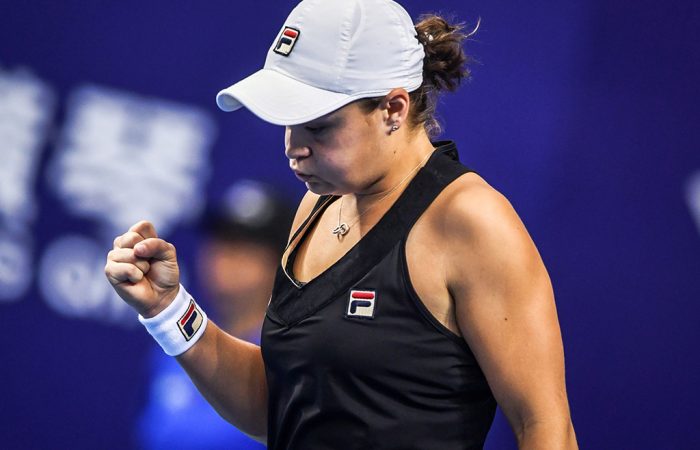 Ash Barty showed Carolina Garcia no mercy when they met in the WTA Elite Trophy tennis tournament – but now she owes the Frenchwoman a debt of gratitude.

The Australian expected her season to be over despite beating Garcia in Zhuhai on Thursday night, but the 22-year-old ended up advancing as the Orchid Group’s semifinalist 24 hours later.

Garcia recovered from a back injury that hampered her performance against Barty to stun world No.12 Sabalenka 6-4 6-4 on Friday.

The game aggregates from round-robin play ultimately left world No.19-ranked Barty as the only member of the trio to have a positive differential.

Belarusian Sabalenka, who beat Barty 6-4 6-4 in the group opener, was all square at 20-20 while Garcia also exited the tournament with a game record of 19-20.

Barty now meets defending champion Julia Goerges, who was two points from elimination before the German on Thursday recovered to clinch her final Rose Group clash with Belgium’s Elise Mertens 6-2 7-6(5).

Top seed Goerges had been vulnerable because she had lost her first match to Estonia’s Anett Kontaveit in three sets.

Spaniard Garbine Muguruza beat Anastasija Sevastova of Lavtia in a third-set tiebreak to advance to the semis where she will meet American Madison Keys.

Keys won the first set of her match against China’s Qiang Wang, which was all she needed to ensure her progression from the Azalea Group.