Ash Barty's straight-sets win over Caroline Garcia on Thursday keeps the Queenslander in the hunt for a semifinal berth at the WTA Elite Trophy in Zhuhai. 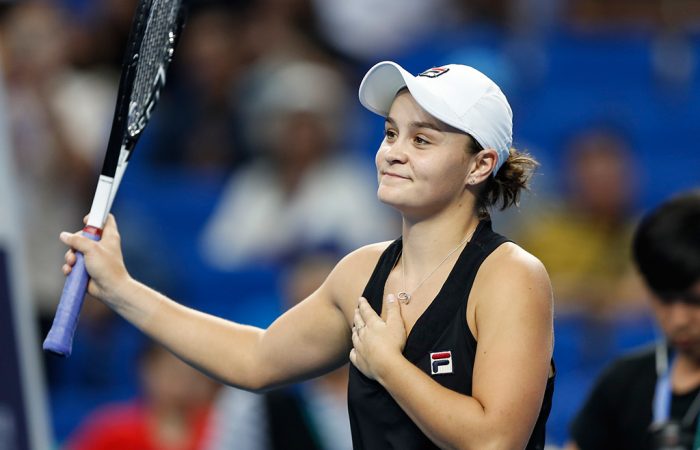 Ash Barty on Thursday bounced back from a straights-sets defeat to Belarusian Aryna Sabalenka, but victory over Caroline Garcia may not be enough to earn a semifinal berth at the WTA Elite Trophy in Zhuhai.

The Australian wrapped up her round robin play in Orchid Group on Thursday with a efficient 6-3 6-4 victory over the Frenchwoman, based on a flawless serve and the conversion of two break points.

However, world No.12 Sabalenka still holds the advantage in the three-player group as she will be favoured to beat Garcia in the final match-up in Zhuhai on Friday.

In contrast to the slow start against Sabalenka, Barty exerted control early by breaking Garcia’s second service game before closing out the opening set.

The 22-year-old Queenslander, who is playing her first singles tournament in a month since suffering a shoulder injury, also broke Garcia early in the second to avenge a loss to the current world No.18 in their only previous meeting.

Barty had no expectations of making the semifinals after wrapping up her match in 75 minutes.

“I’m certainly very happy to finish off my season with a win,” she said.

“It’s nice to come away with a win and now I get to sit here tomorrow and enjoy the next match.”

The Elite Trophy features the world’s top 12 singles players who did not qualify for last week’s WTA Finals.