Annerly Poulos competed strongly in the final of the WTA Future Stars U16 event in Singapore while Charlotte Kempenaers-Pocz advanced to the semis of the U14 event. 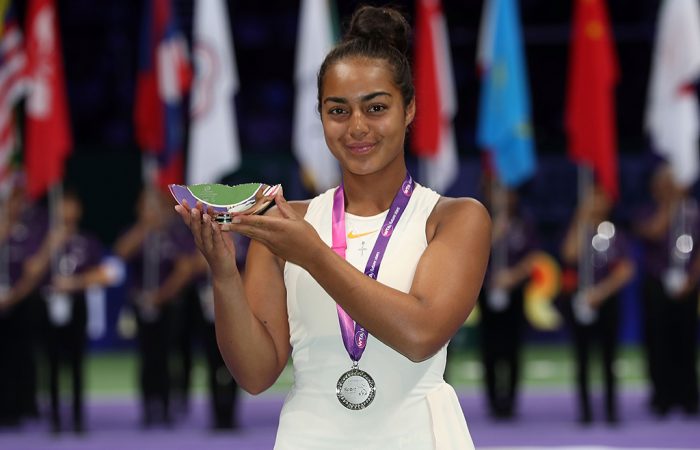 Australia’s Annerly Poulos capped an excellent week in Singapore with a run to the final of the WTA Future Stars U16 event.

Poulos went undefeated in the five-match group stage and then won her semifinal on Saturday before going down 7-5 7-6(5) in Sunday’s final to Ayu Ishibashi of Japan.

Another Aussie, Charlotte Kempenaers-Pocz, advanced to the semifinals of the U14 event before falling on Saturday in the semifinals to Japan’s Mio Kozaki.

Like Poulos, Kempenaers-Pocz won all five of her round-robin matches in the group stage, dropping just one set along the way.

Poulos didn’t drop a set in her group matches before triumphing in a thrilling semifinal over Uzbekistan’s Setora Normuradova 5-7 7-6(2) [10-5].

The final was played at the Singapore Indoor Stadium, the same venue as matches for the WTA Finals.

Another highlight for Poulos was taking part in the WTA Finals draw ceremony, during which she received a signed racquet from defending champion Caroline Wozniacki.